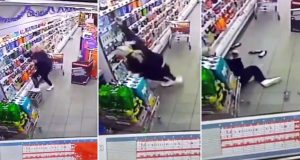 According to the British newspaper Daily Star, the poltergeist attack on the seller Elise happened recently in the Bourtreehill supermarket in the Scottish city of Irvine.

When arranging the goods, the store employee at one point wanted to lean her foot on a plastic box standing on the floor, but … someone invisible pushes box away and the girl falls.

The incident was recorded by a surveillance camera installed in a supermarket. Skeptics, having watched this video, assure that Elise herself pushes the box aside with her foot, saying that there is a light touch.

However, in this case it is not clear why the girl falls so naturally, moreover, she receives injuries.

Moreover, the employees of this supermarket claim that they really have a poltergeist in their store, it even has a name – Stacy.

In principle, this ghost is quite friendly, so it’s not even clear why he suddenly acted so cruelly with the girl.

Elise herself is a bit overwhelmed by what happened, Daily Star reporters write. Firstly, she assures that she did not touch the drawer with her foot.

Secondly, the girl before that was actually talking playfully with the man in the store, when she suddenly felt a chill on her neck, and then a shiver ran through her back, and what happened is what happened.

Now Elise even cautiously walks around the hall, listening to her feelings and looking at possible dangers.