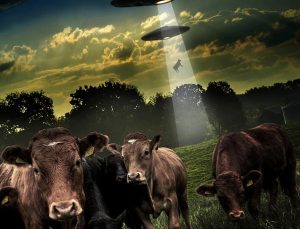 In the US state of Colorado, several dozen cows have died in the past two months and it was officially announced that no signs of wolves or other predators were found. So who is killing the cattle?

On October 4, 2022, in Colorado, near the town of Meeker, a farmer found 18 of his young cows dead. The bodies of the animals lay singly but all together in an area only 1.5 miles long. That is, whatever attacked them, it was probably the same object(?).

Most of the bodies were without visible wounds, but some showed marks as if from wolf claws. Some of the carcasses were found to have punctures, as if from fangs, and their tails were removed.

Autopsies were inconclusive, and when parks and wildlife officials checked, they found no signs of wolves, dogs, or other predators in the area.

From October to the end of November, while experts were looking for the culprit, 40 more young cows mysteriously died on Colorado farms. And in each of these cases, too, there is absolutely no sign of wolves, coyotes, or any other habitual predators.

Then a version appeared that the cows died due to Clostridium chauvoei bacteria, which cause the so-called emphysematous carbuncle in cattle (popularly called the blackleg) – an acute infectious disease that causes swelling in the muscles and rather quick death. But the analysis of samples in laboratories did not confirm this version.

“There is significant autolysis in skeletal muscle sections, making interpretation difficult. However, there is no evidence of necrosis or active inflammation to suggest a blackleg.” (Colorado State University Diagnostic Lab, October 20, 2022)

“In the examined tissues, there are no microscopic lesions that would explain the cause of death of this animal. There are no signs of inflammation, necrosis or degeneration.” (Texas A&M Veterinary Medical Diagnostic Lab, October 21, 2022)

The belief that wolves were the culprit led officials to look for signs of wolves in a variety of ways. They used aerial flights, howls as bait, and hunting cameras to look for wolves and wolf tracks, but to no avail.

There have also been no confirmed reports of wolves in the area, only some unconfirmed sightings, leaving officials confused and frustrated, according to nypost.com.

And if they were wolves or dogs, then why didn’t they gnaw on the corpses of the dead cows? Not a single dead cow was found even lightly eaten. Very strange.

The investigation is still ongoing.