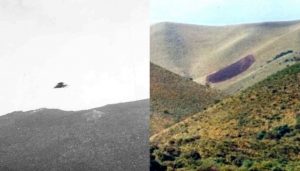 This very strange case occurred in Argentina in 1986 and is almost unknown in the world of ufology, but Spanish-speaking researchers have documented quite a lot of materials on this case.

It all started on the night of January 9, 1986 on a small farm that was located near the hills of the Sierra del Paharillo. Esperanza Gomez, her sister Sarah and her grandson Gabriel Gomez were at the farm that night, reports ufoac.com.

At about 22:00 they were sitting and playing cards when Dona Esperanza suddenly thought she heard a car approaching the farm, and, focusing on this sound, she interrupted the card game and got up from the table. Then all three of them saw a powerful red light enter their house through the windows and doors. 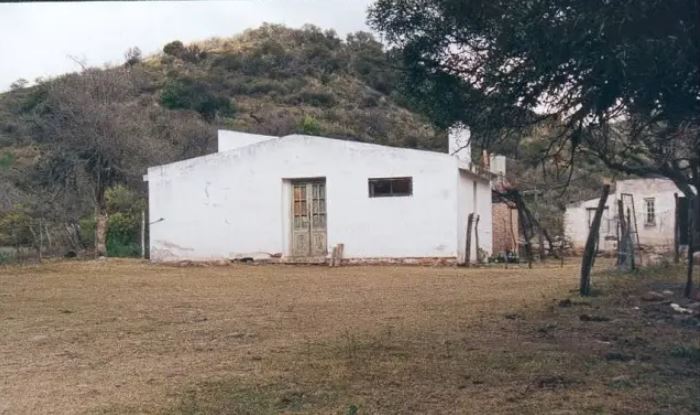 Going to the window, they saw an intense red light moving back and forth across the hills of Paharillo, and a few seconds later they saw something that emitted this red light fly over their farm, hitting a large willow tree that grew about 10 meters from the house.

Then the red light disappeared and everything became quiet and calm. The next day Esperanza came out of the house and noticed that the willow tree had changed the green color of the foliage, now all the leaves were reddish in color.

And then after a while the leaves turned yellow just as quickly. It looked as if the tree had been doused with some kind of acid. The next morning, Dona Esperanza’s son Manuel Gomez was returning from night work and driving to the farm when he suddenly noticed a strange black spot on the southeastern slope of Paharillo Hill. He told his family about it and the next day Manuel and his son Gabriel Gomez went in that direction to inspect the unusual spot. 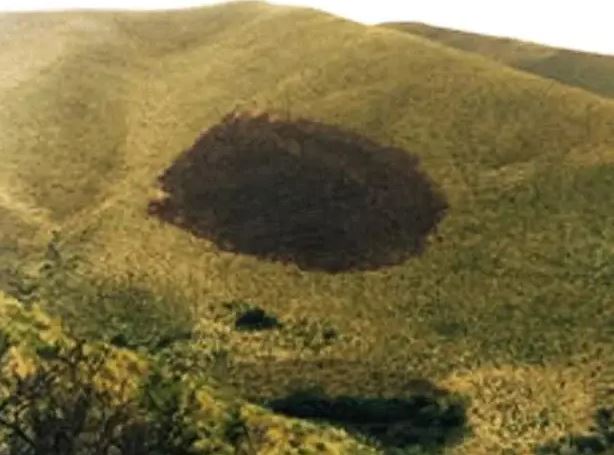 When they arrived at the place, it looked like there was a spontaneous fire, but the men immediately realized that something was wrong when they examined the burned grass. For some reason, the grass was burned only from above and completely uninjured at the bottom, which was very different from the picture of an ordinary forest fire. 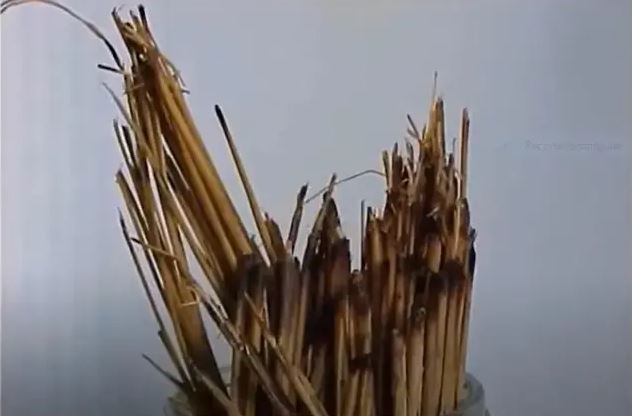 In a matter of days, the story of a strange red light coming from a UFO and an unusual conflagration spread widely among the local population and soon reached Mayor Diego Cesa, who was friends with the Gomez family and immediately equipped a research team to the site of the conflagration.

Dona Esperanza told them everything she had seen during the night, including about the damaged willow tree. The photo below shows how Gabriel Gomez draws a round flying object on wet sand, which he saw in the night sky.

This group also visited the place of the fire and examined everything there. And that was just the beginning. When articles about the incident got into the media, journalists and various scientists began to come to Dona Esperanza’s house en masse. Just at this time, the injured willow began to shed its leaves, “as if something accelerated its biological time,” eyewitnesses said. 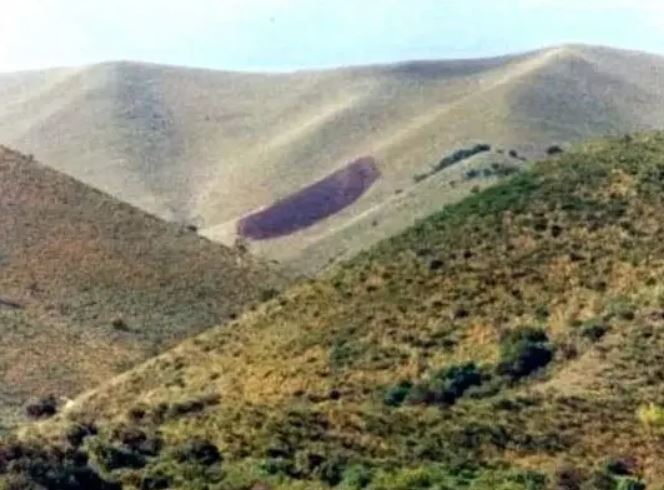 Samples of willow bark and leaves and trees growing next to it were taken and then sent to the Buenos Aires laboratory, where they were studied and concluded that chlorophyll was somehow extracted from the tree. This was confirmed by an attempt to moisten the leaves, which turned out to be impossible.

By the way, when this willow completely threw off all its leaves, then after a while it regrown with leaves, normal and green, as if nothing had happened. Other materials, dead insects, soil samples, stones and ashes were also collected at the site of the fire and near the willow, and they also showed very strange results. For example, some stones have changed their color, becoming much darker on the upper side.

Some amazing features were found in the insects collected inside the burnt spot: the insect bodies looked completely intact externally, but completely empty inside: something seemed to have sucked out all their insides. 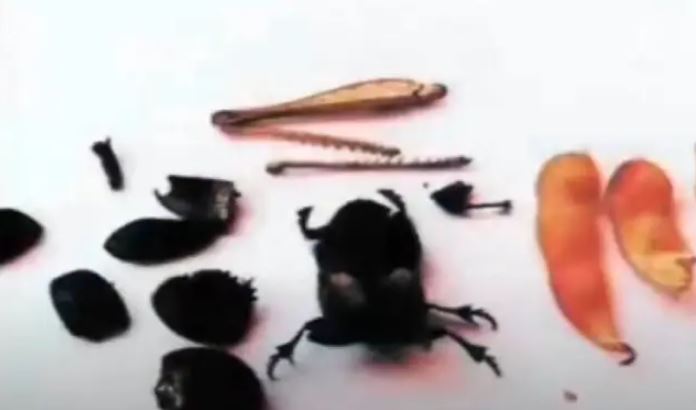 The same thing happened with the remains of a small frog found in the same burnt circle. Outwardly, she looked completely uninjured, as if she had literally just died. There were no signs on her skin that she had been exposed to high temperatures. Inside, all her organs were missing like insects. 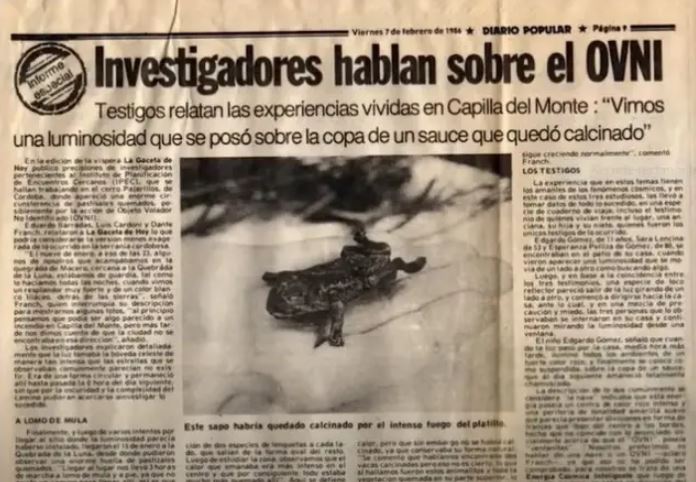 All this was very strange, but it did not allow us to draw any logical conclusions, except for the impact of UFOs, so the whole story disappeared very quickly from the pages of newspapers. A year and a half later, in August 1987, a large forest fire (real) occurred in this region, which devastated all the hills of the Sierra del Paharillo.

And the only place that the fire bypassed was the same area that was exposed to UFOs! 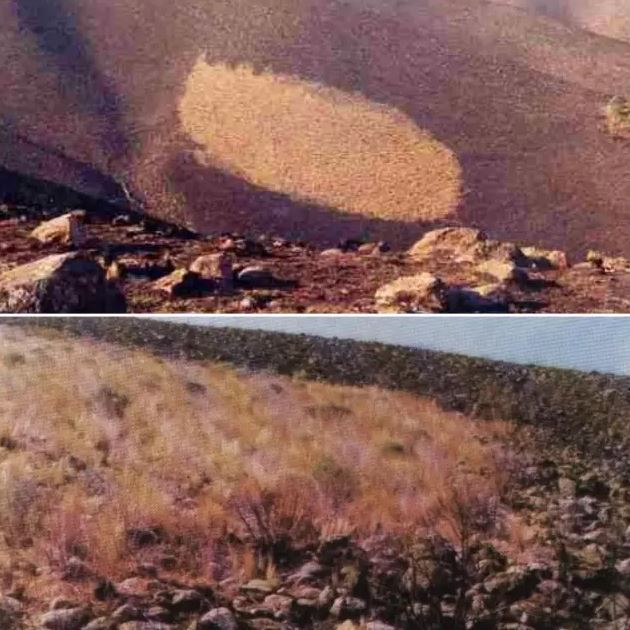 It already seemed to the locals like real witchcraft. Especially after a few days after the big fire, a certain Jorge Suarez specially came to this “enchanted” spot together with journalist Fernando Gabriel and checked whether the grass was burning there. The grass inside the oval easily caught fire from an ordinary lighter, so the theory that the UFO treated this place with something incombustible failed.

In 1989, Spanish engineer Fernando Jimenez del Oso and his group arrived at this place and they found that their high-precision equipment was subjected to strange interference that interfered with its operation.

According to del Oso, the UFO probably “fixed” some unknown energy in the earth, which, like the bell effect, protected this earth from fire and it also caused interference.