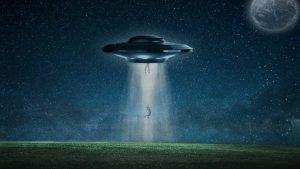 In 1978, a case occurred in the USSR, which is still being discussed among ufologists. Not far from Perm there was a children’s pioneer camp “Rainbow”. Every year, several hundred boys and girls rested here, reports adi19.ru.

They came from nearby cities and villages, as well as from distant ones. Larisa Goyvorova was a native of St. Petersburg and at the age of 15, she visited the “Rainbow” and found herself in the center of strange events.

On July 21, 1978, Larisa Goyvorova woke up at night from the fact that someone was calling her name. The sound was heard in the head. The girl woke up her friend Masha Ostapenko and asked if she had heard anything unusual. The answer was negative. A few minutes later, it all happened again.

Larisa went to the window and saw several luminous objects hovering above the trees.

The teenager became interested, and she went outside. Everything that happened next was told by Goyvorova’s friend Masha: “Larisa went out into the street and looked around. After making sure that there was no one nearby, she took a few steps towards the luminous balls.

“There were four or five of them. At first they hovered over the trees, but then dropped to a height of 3-4 meters. For some time, the objects were above Larisa, and then lined up at the level of her head from four sides.

“Connecting bright blue beams appeared between them. Then there was a flash and Larisa disappeared. Links between luminous objects have been severed, they flew up again above the trees and rushed off to the side.”

They searched for the girl for more than 3 years. The policemen were assisted by both special organizations and ordinary volunteers. Because of this incident, the leadership of the camp changed, and then it was completely closed for several years.

Attempts to rehabilitate the children’s camp in the 90s were unsuccessful. Larisa Goyvorova was never found. Masha Ostapenko also tried to find her friend, but at the age of 30 she stopped searching.

During the investigation into the disappearance of a teenager, it turned out that these mysterious voices were heard not only by Larisa, but also by at least two other male teenagers in the camp. They, unlike the girl, did not leave the camp building.

Was the teenager from St. Petersburg really taken away by aliens? Of course, there is very little material evidence for this version. Only a retelling of Masha Ostapenko and indirect confirmation of telepathic communication with children in the camp.

Ufologists claim that the so-called abduction of people by aliens is a common phenomenon. Sometimes they return to Earth, and sometimes they disappear forever. Much depends on the desire of the person himself and on the intentions of aliens, the researchers say.

There is a hypothesis that they abduct people as biomaterial for study. Also there is a less bloodthirsty version that the aliens are selecting worthy candidates among people to move to a different level of life.

Alas, while humanity is at such a level of awareness about aliens that one can endlessly wonder what such stories actually turned out to be.

A Survivor at Roswell: The Truth About the One that Walked Away

Secrets of the development of civilization: Former soldier made friends with the aliens