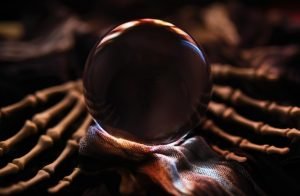 Not always crashed UFOs are found by people. And of course, it is not always possible to document such cases. However, history knows several stories when, quite by accident, devices were discovered that could possibly belong to aliens.

The Soviet ufologist A. Kukol wrote about one such incident in his notes.

In 1975, on the territory of the Ukrainian SSR, builders, while laying communication lines, came across a round metal object located at a depth of 4.5 meters underground.

It is known that everything happened in the village of Beryozka, Chernihiv region. Repair work started in June and literally within two weeks they needed to be completed, but the deadlines were shifted due to unforeseen circumstances. As you already understood, the repairmen, digging a trench, discovered something incomprehensible.

First, the bucket hit something very hard. Moreover, for 10-15 seconds after the impact of the equipment on a metal object, there was a ringing, as if they were beating a bell.

The workers were very surprised and decided to dig up the object. It turned out to be a little over two meters in diameter. Round, looks like a huge ball-bearing. There were no windows or hatches on its hull, with the exception of one small hole.

When trying to pull object out of the trench, the bucket of repair equipment was broken. The weight of the dug-out ball turned out to be more than 2-2.5 tons, which was exactly the weight that the excavator buckets could withstand.

Further work was not possible. The incident was reported to higher authorities. By evening, several detachments of the military were pulled into Beryozka. At about 3 o’clock in the morning, people in special chemical protection suits arrived, in addition, special equipment was noticed.

A survey of local residents did not give anything, no one saw or heard about the fall of an incomprehensible ball. Based on this, A. Kukol concludes that a UFO could crash hundreds or thousands of years ago and during this time a layer of 4 meters of soil formed over it.

The object was taken to Kharkov for further study. The ufologist claims that he was able to find out from communication with professors who were studying the object that it consists of an alloy of tungsten, titanium and steel.

Nobody managed to get inside, but with the help of X-rays they established that the thickness of the outer layer of metal is 26 centimeters, then there is a cavity. Inside the ball there is no electronics and any devices.

After research at the Kharkov Research Institute, the object was delivered by a special flight to Protvino near Moscow, where it is still located in one of the underground hangars.

Considering that no onboard equipment could be found, the question arises, is the find even an alien vehicle? And if not, what then?

Reliable information on further research could not be found. Perhaps they were, but so far nothing is known about this.