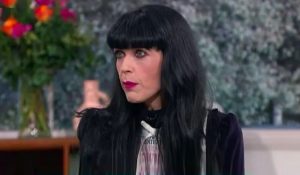 Singer-songwriter Brocarde, 38, from Oxfordshire, went on This Morning and says she’s in love with a ghost named Eduardo and that their ‘relationship’ is ‘very emotionally driven’

She says the spirit, a Victorian soldier who died prematurely at 35 after falling down a well, introduced himself and has been visited her regularly ever since.

“I was taking myself back to a time before this all happened, and if someone said, ‘oh I’m in love with a ghost, I’ve been visited by this spirit, I’d be like ‘hmm, are you sure?,” Brocarde told the hosts.

“I can totally understand how people are skeptical.

“I’ve questioned it a lot because obviously its a bit out there, but I can’t find a logical conclusion”.

Recalling how it all begun, she said: “It was a really strange day, a typical horror movie day.

“I was at home, I’d had one of those horrible days myself, I’d fallen out with one of my friends.

“I was tossing and turning in bed and I literally just felt this burning sensation in my heart out of nowhere.

“Not a pain, it was physical burning and a deep sensation in my chest. It was alarming at the beginning, it was really intense and I was struggling to breathe.

“And then I was propelled forward, I was rigid. I was shaking and in tears and then literally nothing, I went cold.

“I reached over to my bed side table to try and turn the light on and this hand grabbed my arm and threw it back.

“I thought someone was in the house. There was nothing coming out of my mouth but I had tears streaming down my face.”

Seconds later, Brocarde alleges she first saw Edwardo, who at this point was nothing more than a “figure passing” through the room. Then he disappeared, uttering the words “I love you,” as he went.

Brocarde says that Eduardo has been in her life for roughly a year and a half now and she says that she prefers this to any human relationship due to the lack of expectations.