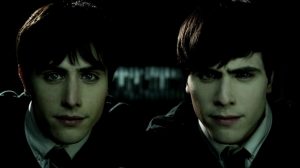 Children, teenaged and adult twins have shown being upset by a twin’s distress and/or sharing knowledge that the only way they do this was by telepathic means.

The telepathic connection between identical twins is a part of the paranormal and folklore. Little scientific research has been done, but there’s overwhelming evidence via personal experiences indicating there’s a psychic link. Many siblings report a sensation of malaise when the twin has a crisis and/or sharing thoughts

There are many examples of this psychic connection between twins, including these:

– A three day old infant makes his mother aware of twin’s life-threatening situation in time to save his brother’s life.

– Adult twin sisters, one living in Belgium, the other in the US, were chatting online and discovered they bought the same pair of pants on the same day from the same retail chain. One had cramps at the moment her sister went into labor and her sister dreamt she was holding a baby at the time her twin’s daughter was born.

– A four-year-old girl burned her hand and her twin has an identical unaccountable blister in the same location on her body.

– Five year old twin girls were in different stores with their parents. The father thought both were with their mother and left the store, leaving one of the sisters behind. Her twin became agitated and acted like she was in a hurry to go somewhere, then suddenly calmed down. When the family reconnected, the parents learned that the twin reacted to her sister’s distress at being seemingly abandoned and was relieved when her father returned.

– A man slumped into a chair, holding his chest, at the same moment his twin brother, thirty miles away, was shot to death.

– There have also been cases of twins who were adopted shortly after birth and were raised by families in different geographic locations. Some were aware of the sibling’s existence; others weren’t. When they discovered each other and met, they found they amazing similarities.

An Experiment with Identical Twin Children and Telepathy

Although both experiments were filmed for TV shows and didn’t adhere to the scientific method, it appears that there is validation that the results showed the chances of the results being coincidences are in the one in a billion range.

In this experiment, the children were in different locations. One was wired to a polygraph, the receiving end of the telepathic link, while the other was used as the link’s source. The receivers, polygraph operators, weren’t aware of what was the stimulus for the transmitters who were taken to another room where they were subjected to strong stimuli.

The twin sunk his hand into icy water. Another time, he was frightened by a rubber snake that was in a box he opened, hoping to find a nice surprise. Spikes were recorded in the receiving twin brother when these incidents happened.

Another experiment involved teenaged twins, Elaine and Evelyn Dove. Elaine sat in the studio in front of a large pyramid constructed by special effects experts, while Evelyn and Jeremy Barrett were in a separate room. Paul McKenna put Elaine into a light hypnotic trance.

While she was relaxed, the pyramid exploded in an eruption of multi-colored smoke, sparks and flashes, startling her. This registered on Evelyn’s polygraph in a significant response with one pen running off of the top of the paper to her reacting to the incident.

Neither twin had a conscious perception of the stimulus although both were aware of it subconsciously.

The Mysterious Case of a Group of People Traveling Through Time