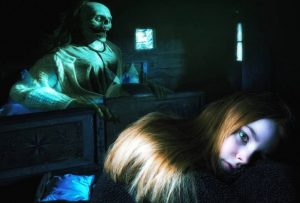 We live in what used to be an old farmhouse in the village of Coldwater, Ohio. The town grew up around the house. The house has been remodeled a number of times through the years, adding indoor plumbing and electricity. My five children and I moved in about six years ago.

Frequently, things would be moved to strange places, things would fall and we would hear strange noises, but we attributed that to the creaks of an old house.

One common, but eerie, sound I heard when I was working in my basement office was of someone stamping their feet upstairs in the living room while the children were at school. I would run upstairs, only to find no one there.

My eight-year-old was afraid to go anywhere in the house alone, saying that he was afraid. And all the children were reluctant to go up in my bedroom, because they said they had nightmares up there.

Several times, I had seen a thin, elderly white man with sparse gray hair and an angry expression on his face from the corner of my eye. He seemed upset with me, not the children.

Last year, I finally acknowledged our ghost after several days of hanging plants falling off their hooks, cups falling from the cabinet, doors slamming and strange noises. I gather he was annoyed because I had attempted to “clear” the house to rid the children of their fears.

The most startling intervention occurred when I placed a plate on the counter, only to watch it slide sideways, then off the counter to the floor. Finally, I gave the ghost a stern lecture, telling him he was scaring the children and if he didn’t stop, I was going to bring in a professional.

Since then, while I still catch glimpses of him out of the corner of my eye and the house still emits some mighty strange noises, he hasn’t broken anything or scared the children.

Ghosts of Fort Mifflin: Specters and Phantom Sounds and Smells