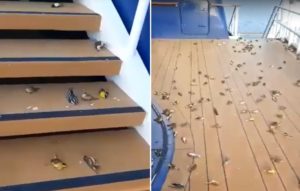 Something strange happened a few days ago on a cruise ship. Waking up in the morning, the workers saw that the open deck was blocked by bird corpses. Some were still alive.

It is always very strange when living things for some reason fall dead from the sky. But it is even more strange when they fall on a cruise ship, the passengers and crew of which are in a confined space and cannot escape from an unknown danger.

It is still not clear on which liner this happened and at what point in the world, the authors of the video asked not to indicate this data.

The video was published on the Crew Center website, which talks about the work of crews of cruise liners and which is led by former workers in the industry.

“It was a beautiful night and we could not believe our eyes when we woke up this morning and saw so many dead birds on the open deck of the ship,” says one of the workers.

It is reported that all crew members are overwhelmed by this incident, and no one knows why the birds died. According to them, they sew something like this for the first time.

Later, the bodies of dead birds were removed, and the decks were cleaned of blood.