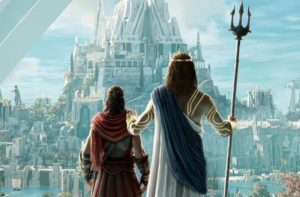 Following the latest scientific achievements, scientists began to unravel the longstanding mystery of the origins of our civilization.

The discoveries in the field of geology and paleontology, and the on-site study of folklore of various peoples helped scientists to locate (with a high degree of probability) not only the primordial mother country of today’s human race but the original motherland of our ancestors, the Aryans, which were to be referred later to as the Russes.

The well-known scientist and explorer Kandyba raises the above and other issues in his books. Kandyba is also the president of the World Association of Professional Hypnotists.

He spent many years exploring various parts of the world, taking part in expeditions across the Atlantic and the Arctic. Eventually, he produced a sensational theory by comparing assorted pieces of information. His theory seems capable of defying some dogmas that look firmly implanted in the world of science.

During an expedition in the Atlantic, Kandyba learned from experience that Atlantis was not located in that part of the ocean – quite contrary to the land described by Plato in detail. Unlike other scientists who gave in, Kandyba continued his quest. He opted to seek advice in the Vedas, one of the most ancient historical chronicles.

Many experts in religious writings are inclined to view the Vedic myths as the oldest and most objective source of information. The sacred Hindu writings are penned in a peculiar poetic manner, which at times makes a snaky line between truth and fantasy disappear. However, there is a direct reference to the primordial motherland of the human race in the Vedas.

For example, the sacred book Rig-Veda contains a story of a great civilization that existed 18 million years ago on the continent Oryana. The location of the continent could be easily identifiable with the help of Hindu sacred writings. According to them, the city of Arka, a capital of the united empire, was situated beneath the Polar Star i.e. on the territory of the present-day Arctic.

According to the ancient Vedic writings, the first man was called Ory. The name of the first man was used not only for naming both the ancient continent and the Aryans, the prehistoric people. Our ancestors were head and shoulders in achievements in comparison with the ancients. The Oryans professed monotheism. Not unlike the present-day Christians, they accepted the doctrine of the Trinity or the union of three persons (Father, Son, and Holy Ghost) in one Godhead.

Some scientists showed a fare share of skepticism with regard to the writings, they even called them a fake because that philosophy of life resembled the Christian religion a great deal. However, the supporters of the theory were capable of firing back and defend it.

The well-known researcher of Slavic mythology and author of numerous books Asov could find evidence to show that all the peoples had a similar concept of the world yet the ancient faith eroded over the ages. Asov found evidence after running a comparative analysis of the myth of our direct ancestors.

The wooden tablets that were found recently in the territory of present-day Russia constitute irrefutable evidence of monotheism among our ancestors. At the very beginning our ancestors worshipped Godhead in three hypostases. Other deities came to light later.

At the first stage of the myths they acted as mere assistants to the Creator. The sources of the Slavic wooden tablets are thought to be much older than the Hindu Vedas. Both of them contain information that looks miraculously identical. On the other hand, the Slavs could have communicated with the ancient Indians only if the both peoples had shared the motherland.

According to the Vedic writings, the ancient civilization populated the whole continent. It was a single state, divided into principalities and governed by a sole ruler. The residence of a ruler was located in the city of Arka, the capital of the empire. It is easy to see where the city was situated by using the celestial map. The city was lying right under the Polar Star.

According to the Vedas, the empire was free from wars and conflicts because the people believed in God and followed His commandments that were very much akin to those in the Bible. The Oryans were building lots of cities all across the land, they had a good knowledge of astronomy and medicine. All temples were alsousedas observatories. The Oryans possessed many other secrets that were lost after the civilization ceased to exist.

These days we have only bits and pieces of some moth-eaten legends dating back to prehistoric times. Those legends say about big and mighty ships calling on other parts of the world populated by savages. The ships carried tall strangers who had astronomical and astrological calendars, and expertise in pottery and metallurgy.

Those were legends about the great civilization of Atlanteans, which was actually situated in the Arctic. Perhaps some translators are to blame for humankind’s great misunderstanding. The translators misled scientists when they wrote “Atlantis” in lieu of “Arctitis.”

The Vedas have a detailed account of the tragic demise of the Arctic civilization. Legend has it that God advised the high priest of Arka of the incoming destruction of the civilization as the priest was worshipping at the temple on a mountain. It was revealed to the priest that the fertile lands of the empire would be covered with ice after freezing temperatures superseded the warm climate.

The priest relayed the revelation to the people and urged them to move for other parts of the world. But the people ignored God’s warning and the priest’s requests. The residents of tiny principalities decided to stay and fight for their life till the end. As a result, many of them were killed by hunger and extremely low temperatures.

Different peoples of the Arctic region still have numerous stories about strangers coming from the land stuck in between the ice. There is some evidence of this hypothesis in some Slavic myths e.g. the myth of the winter that lasted several years. Some scientists maintain that the myth of the building of the tower of Babel is nothing else but an account of the collapse of the Arctic civilization.

Scientists were fortunate to obtain soil samples at a depth corresponding to some 20 million years. The soil samples extracted from a depth that equaled 18 million years were not only frozen earth. They also contained a few fragments of plants e.g. a piece of grapevine – evidence to support the hypothesis featuring warm and fertile lands in the prehistoric Arctic.

Explorers of the Arctic claim it is impossible to find any signs of civilization buried under the layer of ice that is one kilometer thick. A new theory was put forth. It featured settlers from the Arctic forming a new civilization. For many years there was no evidence to prove the theory. Then archeologists came across sensational finds in Arkaim, in the Ural Mountains.

Having excavated and reconstructed some if the buildings on the excavation site, scientists arrived at the conclusion that a huge city used to sit near the eastern slopes of the Urals. The city had temples and palaces, and astronomical observatories. A painstaking comparative analysis on the basis of the Vedic writings enabled scientists to maintain that the city in the Urals was one of the last strongholds of the Aryan civilization.

According to the legends of the Middle East, the prophet Zoroaster came down from the territory of the present-day Urals. The prophet allegedly drew from the bits and pieces of the ancient Vedic doctrines while devising a new religion that dominated in the Middle East for many years.

Archeologists found out that the residents fled Arkaim about 3,500 years ago, the time of the eruption of the Santorin volcano. The Aryans had to run away from cold weather after the climate in the Urals started to change. The site of the city of Arkaim was discovered by Professor Zdanovich in 1987. It was declared a national historic reserve four years later. Arkaim is one of the few existing monuments that remind us of our distant ancestors.

Ancient texts reveal: Earth was ruled for 241,000 years by 8 kings who came from heaven