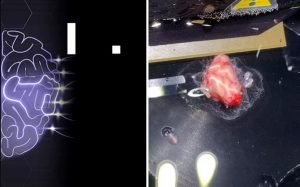 Hundreds of thousands of brain cells from a laboratory Petri dish were taught to play Pong, responding to impulses of electricity, and they began to play better than artificial intelligence did.

Pong is one of the earliest arcade video games, whose idea is to toss a ball between two “rackets”.

According to New Scientist, scientists have found that living brain cells grown in laboratory glassware can be trained to resemble the video game Pong by placing them in what researchers call a “virtual game world.”

“We think it’s fair to call them cyborg brains,” says Brett Kagan, chief scientist at Cortical Labs, who is leading this new study.

“Many scientists around the world are studying brain neuronal cells grown in Petri dishes in laboratory conditions, often turning them into organelles that look like real brains. But this study is the first time that the so-called mini-brain was created specifically for certain tasks.”, – says Kagan.

In this case, the scientists used a single player version of Pong. During the game, electrical signals tell the mini-brain where the moving “ball” is. In response, the fired neurons send electrical signals to move the racket towards the “ball” and “bounce” it.

This amazing process is shown in the video below.

“We often joke that these brain cells live in the Matrix. When they’re in a game, they probably believe they are moving the paddle themselves,” says Kagan.

In the video, a digital map of the cells shows how they react during the game. As the ball moves, individual sections of the squares are activated to control the paddle. This is shown in the video as histograms moving up and down.

During the testing period, it was found that training a mini-brain takes much less time compared to the same with artificial intelligence.

AI can take hours, if not days, to learn how to play games like Pong, and it took the neurons of the human brain only five minutes to learn it.

“It’s incredible to see how quickly they learn, in just five minutes, in real time. This is truly an amazing thing that biology is capable of,” enthuses Kagan.

Kagan hopes that in the future this technology can be used to create a technology that combines traditional silicon technologies with biological ones, that is, actually creating something like cyborgs.