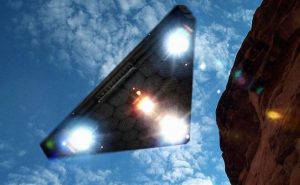 Residents were left stunned after a mysterious object was filmed lurking over a Texas. The unusual object dubbed as “bulging triangle UFO” was spotted prowling the skies of Cedar Park borders Austin to the Northwest.

“This happened at 5:09 am I was not about to go out there I wasn’t even dressed and I was scared. People always think they would have done things differently if it was them but you never know what you’ll do when you actually are having that experience.

“I always thought I would be doing the most to get a better view and record but my anxiety was triggered and I could not go back to sleep after that. I was only recording to show my bf who was awake at the time since he works the night shift.

“Pretty much disappeared after idk where it went. I thought it could’ve sleepy towards the back of my house so I went to the window to see if I would see it but nothing.”

That footage, recorded on a mobile phone, sparked discussion among Post readers who said they’d seen similar ‘unidentified’ lights in the sky.

One user said: “My spouse and I used to see a same shaped ship when we lived in Texas. First sighting was in Stephenville, and then again multiple times in Fort Worth.”

Another added: “Black project, I believe that the black triangle ufos are man made.”

One popular and almost equally fantastic suggestion put forward by people online is that the UFO could be a clandestine military aircraft, specifically the apocryphal TR-3B.

TR-3B is believed to be a secret spy plane that is said to be triangular shaped and, some say, powered by anti-gravity technology gleaned from a downed alien vehicle.