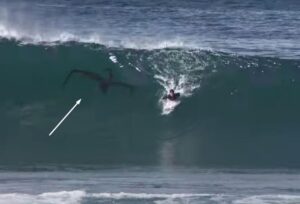 When surfing in San Diego, one can only guess with whom surf instructor Ryland Rubens shared the water.

A massive mysterious creature appears to be swept along by the waves in footage released earlier this year on Instagram.

“What the heck is this thing in the water?”, this question was left by several commenters under the video.

The video attracted attention for one reason – if you look closer to the left side, you can see how the wave washes away a large dark being.

The creature does have an odd appearance, especially given its almost spider-like shape, with only four long legs.

Though the oceans cover more than 70 percent of Earth, just 5 percent of Earth’s oceans have been explored and charted – especially the ocean below the surface. The rest remains mostly undiscovered and unseen by humans.

What got into the frame in the video will probably remain a mystery: whether it was some strange sea creature, kelp, or some other object.