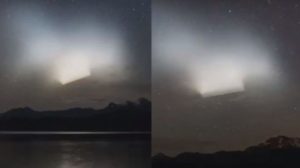 Photographer Santiago Arevalo said he arrived at Bariloche Beach at midnight with four friends. The goal was to take astrophotographs of the Milky Way.

“We all sat on the sand, looked at the stars and talked for a while. Around 1:30am (December 8), we saw that from behind the mountains, on the other side of the lake, some kind of white glow begins to appear, and then a huge luminous object”, said Santiago.

“It was not the Moon, because the Moon comes out from a completely opposite side.”

” ran to the tripod and managed to take a series of shots. The object was huge, and its flight was accompanied by a kind of triangular halo.”

“It was very strange and the light was very bright and white. After a few moments, it disappeared into the sky, and the white glow persisted for several more seconds.”