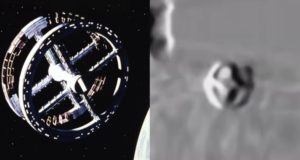 This strange object was filmed travelling through the sun by a NASA satellite before the unexplained malfunction of its cameras began.

A conspiracy theorist suggested that the suspected UFO might be bigger than Earth and called it “pretty spectacular” in a video of the terrifying incident.

The footage was uploaded to the Secret Underbelly 2.0 YouTube account and rapidly accumulated thousands of views. Explaining its observations, the YouTuber said:

“On February 29 2020 STEREO A, one of the cameras that observes the sun, caught this interesting craft in our solar system.”

“Now the footage was only four seconds long before the cameras malfunctioned and then – guess what – started working after this thing passed.”

“Take a look at this: It is pretty spectacular. This has to have the wow factor to it.”

“If you just look at the very size of this thing. This thing is huge. You can see the planets line up so it’s next to Venus, Earth, Mercury, and this thing is bigger than them.”

“But it’s all a perception of distance. This thing could be further away and if it’s further away this is a really huge ship and if it’s closer it’s small but there’s something there, it’s big. Still big enough to put a few people in.”

In the clip, a huge wheel-shaped object appears in the right-hand corner of the screen with the sun in the background. The objects’s shape looks symmetrical and the YouTuber says it’s “nothing like” any of our own spaceship.