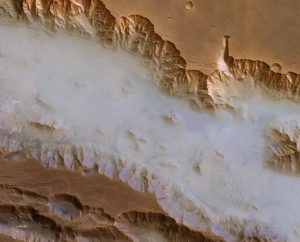 Scientists have discovered a large reservoir of water hidden in a giant canyon on Mars.

A team of scientists using the European Space Agency’s (ESA) ExoMars orbiter has discovered a large deposit of water directly below the Martian canyon system of the Mariner Valley, which is ten times longer and five times deeper than the Grand Canyon in the United States.

The presence of water on Mars may indicate the presence of alien microbial life, as well as the possibility of more complex life forms, especially if Mars has the same vast expanses of water as on Earth.

“With TGO, we can look one meter below this dust layer and see what’s really going on under the surface of Mars,” said Igor Mitrofanov, lead author of the study, from the Russian Academy of Sciences.

“FREND has discovered an area of ​​unusually high amounts of hydrogen in the colossal canyon system of the Mariner Valley: assuming that the hydrogen we see is bound to water molecules, up to 40 percent of the near-surface material in this region appears to be water.” he added.

The vast area, about the same size as the Netherlands, indicates that there is plenty of room to find more water.

“We found that the central part of the Mariner Valley is filled with water – much more water than we expected,” added co-author Alexei Malakhov.

“This is very similar to Earth’s permafrost regions, where water ice is permanently stored under dry soil due to constant low temperatures.”

“In general, we believe that this water most likely exists in the form of ice,” Malakhov argued.

Scientists call this discovery a huge step towards potentially finding signs of ancient life on the Red Planet, or even possible places where humans themselves could one day settle.

Dinosaur in the backyard: A creature that looks like a Velociraptor caught on CCTV