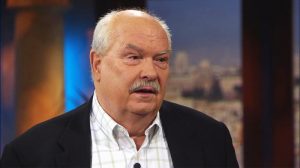 A brief look at the life of former atheist Howard Storm, who died and spent time in the afterlife. On his return to the living he became a devout Christian minister.

Howard Storm was an avowed atheist and a thoroughly unpleasant sort of man, if his own testimony is to be accepted as fact. He drank excessively, smoked three packages of cigarettes a day, and cursing was second nature to him.

He was egotistical and often got into fights. As an art professor, he would not allow anyone to speak about God to him or in his studio at the university where he taught for many years. He especially singled out a nun who was one of his students and warned her not to bring the topic of religion up at any time.

Storm was in Paris in 1965 on a tour with students when he was suddenly overcome by the most excruciating pain he had ever felt. He screamed and fell to the floor of his hotel room, terrified of what was happening to him.

His wife called a doctor who arrived shortly after and informed Howard that he had a perforated duodenum and would require emergency surgery. An ambulance was called and he was taken to the hospital. And after a long wait for a surgeon, Howard died.

Suddenly finding himself standing Howard wondered why he was upright and not in his bed. He looked at his wife who was sitting beside the bed and spoke to her but there was no answer. He began to hear voices saying, “Howard, come with us. We have been waiting for you for a long time.”

The voices were pleasant and told him that they could fix his problems, but soon they became vicious and taunted him. They began to attack him, tearing off pieces of his flesh. The struggle went on for some time and then Howard heard a voice say “Pray to God.”

He didn’t know how to pray but tried to say all the churchy words he could. The voices, still taunting, began to retreat. Howard was now alone in the darkness with his thoughts.

After awhile in this state Howard called out “Jesus help me!” and he saw a pinpoint of light approaching him. It was Jesus and Howard was to spend much time with Him in conversation. Storm said that he knew then that God loved him, God loved creation, God is love. While Howard felt terribly ashamed to be in the presence of Jesus after the life he had led, he received assurance that he did belong there and that he was loved.

“The only reason I could bear to proceed with the life review was because of their love for me. No matter what we watched me do in life, they communicated their love for me, even as they expressed their disapproval of the things I did.”

After coming back to life Storm was emotionally exhausted and would weep whenever he thought about his experience, which is as vivid to him today as it was 23 years ago. He attended the Union Theological Seminary at Dayton, Ohio and received his Master of Divinity degree.

After being minister of a church in Ohio for 14 years he is now pastor of the Covington, Ohio, United Church of Christ. His first marrige broke up because of his new persona and he has remarried a “wonderful woman” who is a partner in his Christian beliefs.

Below are a few interesting quotes from Howard’s book, talks and interviews.

“The only authentic love in this world is achieved when there is a balance between love of God, love of neighbor, and love of self.”

“Our purpose is to know and do God’s will in this life, and we do this when we love one another as God loves us. Every person, without exception, needs to be loved by us. This is the most difficult and most important lesson of our life.”

“Every person has guardian angels all their lives throughout his or her life. Our angels are the embodiment of compassion for us. Because of their reverence for God, they cannot impose themselves on us or intervene in our lives when we choose to reject them and God’s love. The more we despise our angels, the more we are on our own. Our desire for self-sufficiency insulates us from the divine order for our lives. When we realize our need for God and God’s messengers, we grow in desire and opportunity to live in the divine order. Love attracts more love and hate attracts hate.”

About other Life in The Universe:

Valley of Dawn: A Place Where Faith In Aliens and Jesus Come Together

Children talk about how they died on September 11, 2001