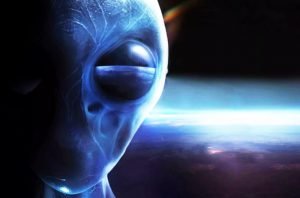 Astrophysicist, psychologist lay out challenges of communicating with beings who may be much smarter, don’t share our conceptual system.

In Steven Spielberg’s 1977 film “Close Encounters of the Third Kind,” extraterrestrials communicate with humans through a catchy five-note sequence.

But what would really happen if we made direct contact with an alien species? How would we recognize or interpret their intelligence, and what would we say?

Those were just some of the questions discussed during a wide-ranging conversation Monday afternoon sponsored by Harvard’s Mind Brain Behavior Interfaculty Initiative and moderated by Edward J. Hall, Norman E. Vuilleumier Professor of Philosophy.

Using “Arrival” as a springboard, panelists Jesse Snedeker, a professor of psychology and expert in language comprehension, and Avi Loeb, an astrophysicist and author of “Extraterrestrial: The First Signs of Intelligent Life Beyond Earth” (2021), examined the potential challenges we might face.

Loeb, the Frank B. Baird Jr. Professor of Science, has long argued the search for alien life should be taken more seriously in scientific circles. He said there are a range of factors to consider should we encounter an alien race. (Loeb’s book suggests a fast moving, pancake-shaped space rock that astronomers dubbed Oumuamua in 2017 might actually be a piece of interstellar technology.)

First, humans must try to conquer their sense that they are at “the pinnacle of creation” and instead understand that they are instead likely “somewhere in the middle of the distribution of intelligences in the Milky Way galaxy,” said Loeb, founding director of Harvard’s Black Hole Initiative.

Earth’s inhabitants also have to be mindful of the “technological gap” that likely will exist between the human race and a messenger from beyond the solar system. (Such a messenger, he said, probably would arrive in the form of an artificial intelligence object capable of a making a journey lasting millions or even billions of years.)

Given a possible wide knowledge gap, we should also be prepared for the possibility that aliens may not want to communicate with us all, said Loeb, just as we have no desire to communicate “with ants on the sidewalk.”

Still, if we are able to directly engage as the “Arrival” scientists do, the challenge becomes how. Such a process would differ greatly from the search for alien life in years past, said Loeb, when people imagined any contact would likely come in the form of radio signals from extraterrestrials, which may have taken thousands of years to arrive.

“However, if you have a visitor in your backyard, you better know what you’re doing,” he said, adding that we “might need our own AI systems to assist us in interpreting their AI systems.”

One potential challenge to communicating with extraterrestrials is the possibility that such beings may not possess a conceptual system similar to our own, Snedeker said. To illustrate she used the example of how children learn language.

“When children hear a sentence like ‘The cat is on the mat,’ they have concepts roughly like cats, roughly like mats, and roughly like spatial relationships,” she said. In “Arrival,” actor Amy Adams, who plays a linguist, tries to recreate the “child language learning situation,” with the aliens by offering basic words to describe people and actions, all while assuming the aliens’ “conceptualization” is “reasonably similar,” to our own, Snedeker said.

But if those concepts “weren’t available to that other species, it’s unclear what any of those words would map onto,” she said. Still, Snedeker said she is optimistic that we might share some broad-level constructs with intelligent aliens who might also be the product of biological evolution.

“I’m kind of hopeful that we’ll have enough in common with their conceptual structures,” she said, adding that “incomplete understanding is still understanding in some degree. If we had slightly different concepts than theirs or even substantially different, we [still] might get a long way toward understanding.”

Loeb, who is working on a documentary with the producer of “Arrival,” says remaining aloof from the search for intelligent life beyond our solar system is short-sighted.

“We know that stars formed before the sun by billions of years. We know that they have planets like the Earth around them, so the environment that we have is not rare,” he said. But finding evidence of alien life requires the kind of funding and support awarded large-scale projects such as the search for cosmic gravitational waves or dark matter.

“Given the public’s interest in the subject, the implications that it will have for the future of humanity, I think it’s actually non-intelligent on behalf of the scientific community not to engage with a search.”