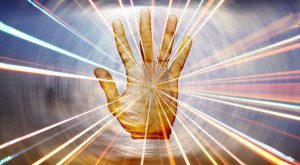 Perhaps the most powerful things to keep in mind about shielding is that if someone lashes out at you, you will only come to harm if you perceive that you will.

For many people, this is terrifying, but only because they do not trust their ability to believe that they won’t be hurt when logic as it stands dictates that: if someone tries to hurt you, you’re probably going to get hurt. Having complete responsibility for the self and whether or not that self becomes a victim is a daunting prospect at first, but only because the mind perceives it as being dauntingly massive and complex.

In reality, however, it is as simple as knowing with complete certainty and conviction that the only things that can harm you are those that you let to harm you. Here you can use doubt as well, as doubt is a projected energy which influences the way the reality you perceive around you works.

Laughing with the firm knowledge (powered by the strong doubt) that something cannot hurt you, you can override its power within perceived reality. Skeptics have been doing this for a long time: take my great grandfather for example.

When a local mystic who had performed his fair share of interesting and inexplicable actions utilizing the belief he carried in his ability to influence perceivable reality confronted my great grandfather and did a ritual to put a “hex” on him while in his place of business, my great grandfather’s doubt and disbelief in the mystic’s ability to affect him with non-physical energies was so strong that he remained immune to whatever hexes and curses the other man tried to put on him (while others he had “hexed” and cursed did not.) At the most basic level, the central tenant of self-defense is knowing that you can only be hurt if you allow yourself to be hurt.

Drawing from the notion of the importance of ritual drama, or rather the need for a physical context in which to frame non-physical intent, I have provided a means by which these thoughts may be put into greater, more effective action, utilizing simple visualization techniques and affirmations.

The most powerful visualization I have given (and observed the effect of) in the past starts with closing one’s eyes and settling into a relaxing breathing cycle (as with meditation.) Clear your mind of all thoughts, then slowly, moving with the rhythm of your breath, visualize yourself from the outside, a fortress already impenetrable in its integrity.

To that impenetrability, we will then layer on a shield of glowing golden-white light which totally envelopes your form like an impenetrable, armored shell. Visualize this layering on, see it as you create that armor in your mind, and call upon any gods, spirits, guides or guardians (passed or living) that you feel empowered by. Visualize them as they help you layer on your defenses. Visualize the negative elements that you feel are attacking you vaporizing into nothingness as each impacts your impenetrable shell.

Repeat this mantra until you feel secure and believe the words fully:

The Study of Parapsychology: A Branch of Psychology