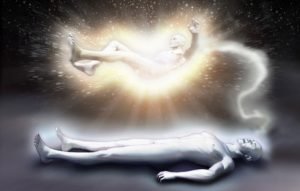 Discover how to have an OBE in three simple steps! Induce an Out of Body Experience with the Mind Awake, Body Asleep technique and go astral travel in the spirit world.

The out of body experience is not a new phenomenon. In fact, humans have known how to have an OBE for thousands of years. There are references in the writings and art of the ancient Egyptians at around 3,000 BC.

Egyptian priests even had a name for the astral body: the Ka. The out of body experience has also been recognized by the ancient Greeks, in the Bible, and in occult happenings in the Middle Ages.

Technically, an OBE is the perception of leaving the physical body. When it occurs during trauma, it is often called a Near Death Experience or NDE. And when it is used to explore other locations, it is known as astral projection or astral travel.

Although the OBE does not require any religious or spiritual beliefs, astral projection implies the existence of a spirit world or alternate “thought-powered” dimension.

Famous Out of Body Experiences

One famous account of an out of body experience comes from Ernest Hemingway, the American novelist. When writing a fictional story he drew on his real life experience of being hit by a piece of shrapnel during battle in World War I:

“There was one of those big noises you sometimes hear at the front. I died then. I felt my soul or something coming right out of my body, like you’d pull a silk handkerchief out of a pocket by one corner. It flew all around and then came back and went in again and I wasn’t dead anymore.” ¹

Another well-known account of astral travel comes from Charles Lindbergh, the pilot famous for the first solo, non-stop flight across the Atlantic in 1927. In the twenty-second hour of that momentous flight, while enveloped in dense fog and fighting the urge to sleep, Lindbergh felt himself losing form:

“I existed independently of time and matter. I felt myself departing from my body as I imagine a spirit would depart… Emanating into the cockpit, extending through the fuselage as though no frame or fabric walls were there, angling upward, outward, until I reformed in an awareness far distant from the human form I left in a fast-flying transatlantic plane. But I remained connected to my body through a long-extended strand, a strand so tenuous that it could have been severed by a breath.” ²

How To Have An OBE

An out of body experience can occur spontaneously or intentionally. The famous scientist and out of body explorer, Robert Monroe, developed a set of OBE induction methods when he stumbled upon the OBE phenomenon in the 1950s.

The most famous is known as the Mind Awake, Body Asleep technique. Now, anyone can learn how to have an OBE and astral travel to explore alternate dimensions and the nature of consciousness.

To train how to astral project, find a dark, quiet room and ensure there are no distractions or time constraints. Lie down, with the arms and legs outstretched, palms facing up and head relaxed. With the eyes closed, focus on taking long, slow breaths.

Working from the toes upward, systematically tense and relax every muscle group of the body, finishing with the face. Imagine each body part disappearing into formlessness once it is relaxed. Try not to move. This can take 5-15 minutes to achieve effectively. Learn more easy meditation techniques.

It is natural for random thoughts and day dreams to interrupt this meditative state. When this happens, gently sweep them away and return the focus to slow breathing. Visualize sitting in a car and moving toward the horizon.

Focus on the scenery while travelling along an unbroken white line in the middle of the road. Imagine the body is physically moving, drifting toward somewhere far in the distance. Keep the body entirely still and relaxed.

There are many other visualizations to try: anything that involves floating, sinking, or falling (eg out of a plane, through the bed) will allow the awareness to drift out of body. Move all focus away from the physical body as it lies still on the bed and quash any unwanted thoughts or inner dialogue. The aim is to fall asleep consciously; hence the term: Mind Awake, Body Asleep.

When the brain descends into a deep enough meditation, the vibrational state will begin. Try to remain calm, as this can be overwhelming or exciting at first. This is the window of opportunity to move out of body, either by rolling or sinking out – or by simply visualizing another place (the living room, or the roof). Do not look back at the physical body or the out of body experience may quickly end.

The vibrational state can sound also like buzzing or white noise, and is often accompanied by complete paralysis but only lasts for a matter of seconds. It will disappear on separation of the physical and astral body. Once out of body, astral travel is achieved through the power of the mind, to any location imaginable.

Scientists continue to debate whether out of body experiences and astral projection take place in reality, an internal dreamworld using lucid dreaming, or some other ethereal dimension. Only further OBE experiments will reveal the true nature of this other-worldly phemonenon.

Sources: 1. Ernest Hemingway: A Life Story, by Carlos Baker, 2. Autobiography of Values, by Charles A Lindbergh

How to Open Your Third Eye