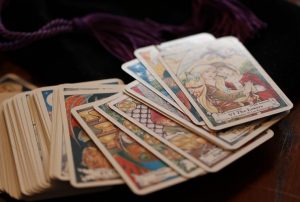 There are many theories that try to explain why Tarot cards give such accurate readings. Do they draw on “otherworldly” energies, or is there a more natural explanation?

A Tarot reader shuffles cards, lays out a bunch of pretty pictures on pasteboard squares and proceeds to tell you things about yourself that she couldn’t possibly know. Is she reading your mind? Are the cards being manipulated by some beyond-this-world influence? Or is there something else entirely at work?

It isn’t only professional Tarot readers who lay out card readings that are accurate. New Tarot readers often surprise themselves at how very relevant the cards they draw are to the question they are asking.

Some are so surprised that they put the Tarot aside, convinced they’ve opened the door to something they can’t control. If it’s not Magick with a “K”, then what is it that makes Tarot cards work?

Ever since Tarot cards first hit the common consciousness a few hundred years ago, people have been trying to answer that question. Here are some of the most common reasons that have been suggested for why Tarot cards can be so accurate.

Tarot Cards are the Devil’s Tool

Throughout history, people have attributed things they don’t understand to the Devil. Tarot readers often seem to know things that they have no logical way of knowing, many people believe that it must be demons or the Devil that chooses the cards in a reading.

Some religions teach that people who read Tarot cards are opening themselves to the Devil’s influence by seeking answers that they should only receive through prayer to God.

A second theory suggests that people who can accurately read the Tarot are psychic, and use their powers to read minds or read the future rather than the cards themselves.

In fact, there are many Tarot readers who attribute their ability to read the Tarot to their psychic abilities. Since Tarot cards are a tool, it’s quite possible that some who have genuine psychic powers have learned to use the Tarot as a way to focus and hone those abilities.

Tarot Cards Tap into Latent Psychic Powers That Everyone Has

Some people believe that everyone has latent psychic abilities that they simply don’t use.

Those people theorize that the Tarot works because it bypasses disbelief in one’s own abilities and touches the psychic abilities that people typically ignore.

Tarot Cards are Controlled by the Subconscious Mind

Some people believe that your subconscious mind is responsible for which Tarot cards you choose in a Tarot reading.

This theory suggests that by some process we don’t yet understand, the subconscious mind puts the deck into a particular order when you shuffle them, or guides your fingers to choose particular cards for a reading.

The most likely explanation is that the Tarot cards use universal symbols like water, fire, earth and air, stars, chariots and the like. While these symbols have meanings that are easily recognized, they can be read in many different ways.

This explanation suggests that the Tarot is like a very pretty set of Rorsharch cards, in which people see “answers” drawn from their own minds. This theory doesn’t account for readers who see something in the Tarot cards that they could not possibly have known, but there are other possible ways to account for that.

The best Tarot readers are skilled at reading body language and tone of voice, as well as at drawing responses from the person for whom they are reading. For many readers, this skill is so practiced or so inborn that they may not even be aware themselves where they are getting their information.

The fact is that no one can tell you precisely how the Tarot cards work, at least not yet. Someday, scientists may understand enough about our minds and the way they work to give a more definitive answer. Until then, the theories above are those most commonly used to explain how Tarot cards work.