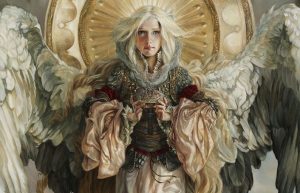 Archangels oversee guardian angels. Doreen Virtue, author of various books about angels, talks of how to ask archangels’ help and the specialties of different angels.

It’s believed that Archangels are helpful, powerful angels that oversee guardian angels. Guardian angels are spiritual beings assigned to individuals to help and guide them throughout their life. People that follow eastern philosophies like Hinduism and Buddhism see angels as enlightened sentient beings, but without wings.

Archangels and ascended masters are able to be with anyone who calls upon them. Some archangels are Michael, Uriel, Raphael and Gabriel. Doreen Virtue, author of book, Messages From Your Angels, talks in detail about various archangels, what their name means and their primary functions.

Archangel Michael for Getting Rid of Fears

Michael means “One Who looks like God.” Archangel Michael helps alleviate the effects of fear among people. He is also responsible for helping people fulfill their divine mission.

According to Virtue, Archangel Michael helps with mechanical or electrical problems. Michael can be called upon, if one needs clarity on an issue, or if one’s personal safety is threatened.

Archangel Raphael is the Healing Angel

Raphael means “God Heals.” Archangel Raphael is the one in charge of healing the body. He helps healers and those that call upon him.

It’s said that Raphael can be called upon for quick healing of injuries, illnesses and other disorders. Raphael can also be called to help heal your pet.

Gabriel means “God is my Strength.” Gabriel is described as a female in early writings, but later writings show Gabriel in masculine pronouns.

Virtue says that Gabriel can be called upon to overcome fear and procrastination in anything involving communications. Gabriel helps writers, teachers and journalists involved in the communication area.

Archangel Ariel in Charge of Environment and Animals

Ariel means “Lion or Lioness of God.” Archangel Ariel is known as the Archangel of the Earth and helps in the healing of animals, especially ones that are not domesticated.

It’s believed that Ariel can be called upon to send energy for an animal’s healing, for the well-being of the environment and to become acquainted with fairies and other elemental beings.

Archangel Metatron is the Angel that Helps Children

Archangel Metatron means “Angel of the Presence.” He is said to be the youngest and the tallest of the archangels. Metatron’s specialty is children – both living ones and those that have passed. Metatron’s presence helps youngsters open their spiritual awareness and wisdom.

Archangels are described in various religious works such as the Bible, the Koran, the Testament of Levi, the Kabbalah, the Third Book of Enoch. Doreen Virtue mentions that no formal prayers are necessary to call upon archangels and that these powerful beings can be instantly present with whoever calls them.

God exists: the scientist mention a few facts in confirmation

Developing Your Own Psychic Gifts: Clairvoyance