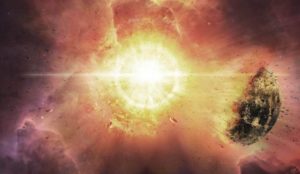 A group of scientists from the University of California (USA) made a prediction about the death of the solar system. The researchers used computer simulations to determine when sun will go out and what will happen to the planets.

In the process of analyzing a model created by a high-performance computer, scientists have come to the conclusion that the solar system will die in 100 billion years.

During the period indicated by the researchers, the mass of the planets of the solar system will increase, and the star itself will turn into a red giant, while losing its energy and continuously cooling. Eventually, it will consume Earth and other planets.

However, some planets will not immediately be absorbed by the giant, for example, Jupiter and Saturn, will increase in mass and leave the solar system. According to the forecasts of American astronomers, both of these planets will undergo changes in their own orbits and move away from the Sun in 30 billion years.

Then, according to the forecasts of researchers, our star will turn into a white dwarf, and the surviving planets will leave the solar system, turning into rogue planets drifting in outer space.