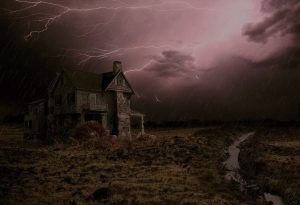 Ali Long had a dream, it was a common one. A home with a yard for her and her two year old daughter. The two lived in a cramped Houston, apartment, it was about all she could afford.

That didn’t stop Ali from dreaming and one Sunday morning she saw an ad in the newspaper that immediately caught her eye. For rent, large white colonial home with large yard. surprisingly it was just $50.00 a month more that she was paying for her tiny apartment.

Ali quickly called the telephone number in the ad and talked to a woman named Jean. Jean and her husband were the homeowners and also owned a plant nursery near the home. Ali quickly got dressed and as agreed went to the nursery.

Jean and her husband seemed to be very nice people, Ali thought if she had to have landlords the couple would be ideal. Ali and Jean then drove the short distance to the home, from the outside it was everything Ali had hoped for.

The white colonial style home had a big yard with trees and a large shed in the back. As the two walked the property Jean explained that the previous tenant had left without saying a word. The man left all of his belongings in the house, they were being stored in the shed but would soon be disposed of.

Things just got better when Jean told Ali that if she wanted to do any landscaping she could have anything see wanted for free from their nursery. Not only that but the third months rent would be free.

Ali couldn’t wait to see inside the house but as Jean unlocked the front door Ali’s euphoria changed to fear. It was hard to explain, Ali felt frozen in place with an ominous feeling that she should not go in the house.

Telling herself that there was nothing to be afraid of, Ali was able to calm her nerves and the two entered the home. Jean showed Ali the kitchen and living room but it seemed rather pointless. The house was so dark she really couldn’t see anything but the two moved on into the dining room.

The dining room was even darker and Ali’s fear returned. The walls had been painted black and had symbols in luminous paint which Ali recognized as pentagrams. She also noticed that she could see the bright sunlight through the windows but the light did not seem to enter the home.

By this point Ali had already decided that she would not be renting the house but she followed Jean to the upstairs bedrooms. The rooms were all painted black except one small room that was painted pink and the sun shone through the window. The tour of the house was over. Ali thanked Jean for her time and quickly left the house of darkness.

About five months later Ali gave a friend a ride to work. After dropping him off she drove towards home. It was about 6:30 in the evening but it was November and it was already dark and raining hard.

Driving on a small two lane street something suddenly appeared in front of her car. She slammed on the brakes but knew it was too late. The anticipated impact never occurred and Ali slid off the road and came to a stop.

What Ali had tried so hard to avoid hitting she described as about eight feet tall with glowing slanted red eyes and outstretched hands. Ali got back on the road and drove to a nearby convenience store. After a few minutes she began thinking that it must have been a man, she had no explanation for what she thought she saw. Thinking the man may be lying on the side of the road she went back to the location.

Traffic was moving normally as she pulled to the side of the road. If she had hit someone he may have been in the ditch along the road. Ali got out of her car and checked the area but found nothing except the tire tracks she had left when she slid of the road earlier.

As she stood in the rain trying to make sense of what had happened she glanced across the street. Directly across from where Ali had seen the eight foot tall red eyed thing, was the house. The colonial house she had toured back in June, the house of darkness. Ali wondered if whatever was in the house was still trying to get her.