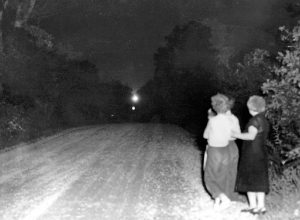 The Hornet Spook Light, an enigma since 1866, is surrounded by legends and theories. Investigators found no adequate scientific answer to fully explain it.

The Hornet Spook Light, AKA Neosho Mystery and Hornet Enigma and the Seneca, Devil, Indian and Missouri Mystery Lights, appears on the Devil’s Promenade in Missouri, near the Oklahoma border. It resembles a ball of fire as it spins and speeds down the center of the road, bobbing and weaving.

The light retreats when pursued and doesn’t allow people to get too close to it. One man saw a subtle orange glowing light floating and weaving beside the road. It changed sizes, ranging from that of an apple to one of a bushel basket.

The light split off into three, then a single one, before perching on a branch and turning blue. Another man tried to shoot the light with a rifle. There was no effect. The Hornet Spook Light has been investigated by the Army Corps of Engineers and a highly respected parapsychologist.

The land was once home to the Quapaw Tribe. A young brave and maiden fell in love and wanted to marry, but her father demanded a dowry he couldn’t afford. They were unable to marry or get the tribe’s blessing, so they ran away. Warriors pursued them.

The couple held hands and jumped to their death. Shortly thereafter, people saw the mysterious light that they believed was the spirits of the young lovers, which they viewed as an ill omen.

Other legends are that the light is the torch of a decapitated Osage Indian chief’s spirit searching for his head and a miner’s lantern held by his ghost, looking for his kidnapped children.

There’s much speculation about what causes mysterious lights. The will-o’-wisp was the most popular one for years. It’s produced by light emitted from decaying organic material. The light is often bright and can, occasionally, be seen in forests and swamps. The will-o’-wisp’s light isn’t as bright as the Hornet Spook’s.

Marsh gas has been another popular theory; however it cannot ignite spontaneously. Even if it could, wind and rain would snuff the flames. The Hornet Light has been sighted during strong winds, which don’t affect it.

Another suggestion is that the light is beams from vehicles’ headlights. Captain Bob Loftin discovered that colored test lights placed in the selected areas of Route 66 could be seen from the Devil’s Promenade.

He deduced that headlights from moving vehicles on the highway could appear as spheres of light and that changing humidity and temperatures would cause the lights to act strangely. This might account for some of the sightings – after motor vehicles were invented.

Another theory is that the light could be created by electrical fields in areas where earthquakes and ground shifts happen. This is a possibility because there are fault lines in the region. Four devastating earthquakes struck there in the early 1800’s. It’s possible that the lights began appearing about the time of the earthquakes but weren’t reported until the population increased in 1866.

It’s a remote possibility that Ball Lightning, a paranormal scientific mystery, could account for the Hornet Spook Light. The phenomenon usually appears during thunderstorms and typically glows, spins, hisses, bounces and floats. The light has been observed too many times in calm weather to account for all of the sightings.

Eminent parapsychologist Raymond Bayless investigated the light in October 1963. Around dusk on the 17th, he saw the light for the first time at the end of Devil’s Promenade. Its intensity fluctuated and, sometimes, there were two lights.

As he and his group approached the light, it receded. They were to observe the light again and again. Bayless was intrigued by the speculations about the light, especially the headlight theory.

Bayless interviewed witnesses, including Leslie Robertson, then, curator of the Spooksville Museum that offered photos, accounts about the light and a platform for people to observe it.

He interviewed other people and discovered that there were times when the light was sighted before motor vehicles were invented and when such traffic was rare or sparse. Bayless also found out that the light’s varying appearances didn’t change through the years.

The Army Corps of Engineers also investigated the light and found no scientific cause.

What Could the Hornet Light Be?

The mysterious light attracts many visitors each year, some curiosity seekers; others, serious researchers. It, like ball lightning, is still one of science’s enigmas. Both exist, but no one knows their cause or exactly what they are.

Some people believe the light is slowly burning itself out and sightings will decrease in the coming years. The Army Corps of Engineers described it as a “mysterious light of unknown origin,” which is, currently, the only answer.