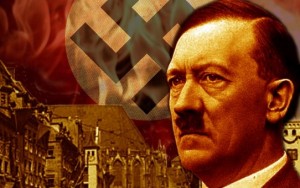 In the centre of the room lies a sunken circular altar with polished steps leading towards a burnt and cracked stone. From here you can see thirteen lanterns flickering on the curved walls. But it’s only when you look directly upwards that the room’s significance becomes shockingly clear. At the centre of the dome lies a giant swastika.

This room was the central temple of the Satanic cult that created and directed Germany’s Nazi party. This so called Vril Society counted many of Hitler’s henchmen as members, including Himmler, Bormann, and Hess. Central to the whole cult was Hitler, who they believed to be a psychic medium in contact with powerful forces that would create an all-conquering Aryan nation. Some saw him as the Dark Messiah.

Historians have tended to downplay the occult foundations of Nazism for fear of trivialising its heinous war crimes, but a recent documentary on the Discovery Channel laid bare the untold story of the secretive religion at the heart of fascist Germany. And bizarrely, it is thought to have been based on a 19th Century science fiction novel that predicted flying saucers, an alien race at the centre of the earth, and a mysterious force known as Vril.

“Occult myths played a central role in Nazism,” says Professor Nicholas Goodrick-Clarke, head of the Centre for the Study of Esotericism at Exeter University. “When we look at these ideas today, we think of them as crazy, but they were central to the early Nazi Party and through them played a critical role in 20th century history.”

“The Vril society was dedicated to evil,” says historian Michael Fitzgerald. “Through their control of the Nazi party they committed the greatest acts of evil in the 20th Century.

To understand why the Nazi party was so obsessed with the occult and Satanism, you have to travel back to Victorian times. In the late 19th Century, Germany in common with Britain, was obsessed with the occult. It was a time when no self-respecting hostess would dream of holding a dinner party without a séance to round off the evening.

There was also huge interest in eastern mysticism and ‘prophets’ of occult religions, such as Madame Blavatsky, were household names. Blavatsky believed that Europeans were descended from a race of angel-like creatures known as Aryans. They claimed that the Aryans had used mysterious psychic forces to build the pyramids, Atlantis and a network of cities beneath Antarctica. What’s more, their descendants were to be found in the Himalayas and their sign was the swastika – the ancient Hindu good luck symbol.

These myths and more were crystallised in the science-fiction novel The Coming Race. In this, Edward Bulwer-Lytton told of a strange people called the Vril-Ya that lived at the centre of the Earth. They wielded fantastic power using a mysterious force known as Vril, which they also used to propel flying saucers.

“But the darkest side of the Vril was their propensity for sacrificing young children,” says Michael Fitzgerald, author of Stormtroopers of Satan. “They would stab them in the chest and cut their throats.

“At the height of their power in 1920s Munich, hundreds of children disappeared. Many are presumed to have been killed by the cult to summon up Vril energy. This may seem like an outlandish claim but when you consider what these people went on to do in the Third Reich, it seems almost tame.”

Central to the Vril Society was the search for a German Messiah who would lead the Aryan’s to world domination and exterminate all other races – especially the Jews. And his rise was predicted by a spirit calling itself the “Beast of the Book of Revelation.”

In a séance attended by the cult followers Alfred Rosenberg and Dietrich Eckart, the Beast is said to have proclaimed that a man named “Hitler” would seize the “Spear of Destiny” and lead the Aryans to power. And within a few weeks, a fiery young man of shabby appearance began attending Thule Society meetings. His name was Adolf Hitler.

The Society was quick to spot Hitler’s potential and to exploit his astonishing personal magnetism. He could transform crowds into hysterical worshippers and mesmerise even the strongest of men. Power seemed to course through him, with waves of emotion whipping up those around him into a frenzy. At times, he seemed possessed.

Hitler was fascinated by the occult. He was a devotee of astrology, numerology, psychic mediumship, hypnosis and water divining. In short, the young Adolf would try anything that might foretell the future or give him control over others.

It was in the Thule Society that Hitler met those who would help him take over Germany and wage the Second World War. Rudolf Hess, Heinrich Himmler, Martin Bormann, Dietrich Eckart, Alfred Rosenberg, and Hermann Goering were all said to be members. It was these, along with Hitler, who used the Thule Society – and it’s inner sect the Vril Society – to launch and promote the Nazi Party.

But even amongst this sinister group, there was an inner core who were even more evil, if that is conceivable.

“Bormann was an avowed Satanist, says Michael Fitzgerald. “Bormann, together with Rosenberg and Himmler, wanted to destroy Christianity and replace it with a truly occult religion of their own making. And along with the Thule Society, they created a political party that would try and do just that.”

When Hitler led the Nazi party to power in 1933, members of the sect occupied all key positions. Hess became Deputy Fuhrer, Rosenberg became Minister of the Third Reich, Bormann was Chief of the Nazi Party Chancellery, Himmler was head of the SS and Gestapo, and Goering, Commander of the Luftwaffe. Only the deceased Dietrich Eckart, whom Hitler dedicated Mein Kampf to, failed to join them.

As soon as they gained power the Nazis began preparing for world domination. Their first act was to re-arm – a clear breach of the Treaty of Versailles, which formally ended the First World War. Whilst the protests from Britain and France were loud and shrill, Hitler guessed correctly that the Allies would shy away from war. In 1938, Hitler annexed Austria. Again, he was appeased. And by the following year, most of Europe lay under his rule and Britain was in his sights.

Central to the Nazi ideology was the establishment of a thousand year Reich. This was to be done by perverting history and creating a new religion based on Aryan mythology – the same mythology propagated by the Victorian occult ‘prophets’ and the science fiction novel The Coming Race.

To do this, Himmler set up an occult research bureau under the wings of the SS, known as the Ahnenerbe. This was instructed to prove German racial superiority by linking them to the mythical race of ancient Aryans. It also hoped to uncover lost magical artefacts such as the Holy Grail and the Spear of Destiny. This, you will recall, was the spear used to kill Jesus as he hung on the cross.

“It’s also possible they were looking for the Ark of the Covenant in Ethiopia,” says Michael Fitzgerald. “They were obviously hoping to use its reputed magical powers for their own ends.”

The Ahnenerbe mounted a series of huge expeditions to search for ancient Aryan cities in the Himalayas, the Middle East and Bolivia. The organisation looted artefacts from ancient sites around the world. It’s no surprise then, that the Ahnenerbe was the inspiration for the Nazi archaeologists in Raiders of the Lost Ark.

The Ahnenerbe devoted considerable efforts to exploring paranormal phenomena, such as ESP, psychokinesis, water divining, astrology and black magic. In fact, the organisation spent around £10 billion in today’s money on research. That’s about the same as the Allies spent on the atomic bomb programme.

Very little of the Ahnenerbe’s work was of practical wartime use, although the German Navy is said to have used diviners to seek out Allied warships and convoys in the North Atlantic.

“They were initially quite successful,” says Michael Fitzgerald. “But they became so overworked, especially towards the end of the war, that they began to fail.”

Forecasting the future was a central preoccupation of the Nazis. The Ahnenerbe employed astrologers, rune diviners and a host of psychics to try and fathom the future. One astrologer, Karl Krafft, quickly rose to prominence after correctly predicting the 1939 Munich assassination attempt against Hitler.

Hitler believed that the astrological forecast and his survival was proof that the occult Gods supported his “Final Solution”. It left him in a state of mystical exaltation. Eyes blazing with excitement he shouted: “Now I am content! It is Providence’s intention to allow me to reach my goal.” Through the Ahnenerbe the Nazi’s began to creating an occult civilisation to supplant our Christian one.

“They began by indoctrinating the Hitler Youth with Satanic ideologies,” says Michael Fitzgerald. “Children and the future leaders of the SS were taught that compassion was weakness. They were encouraged to celebrate pagan festivals and to carry out occult ceremonies.

“Himmler named himself the Black Jesuit – and he meant it. He laid plans to establish pagan temples across Germany after the war. These would replace churches. And on every altar there would be a copy of Hitler’s Mein Kampf.”

A new religious city centred around Wewelsburg Castle was planned. It was to be an occult Vatican dedicated to all things evil. Colleges would educate Germany’s future leaders in the occult, such as psychic mediumship, hypnosis and divination. Museums and galleries would house such artefacts as the Holy Grail, the Spear of Destiny and the Ark of the Covenant. And there would be research labs dedicated to finding new energies – such as Vril – to power spaceships to the stars.

To the modern eye, the Nazi preoccupation with the occult seems completely deranged. Were they simply insane or was something more sinister at work? It is tempting to write them off as insane, but some believe Hitler was truly possessed by evil forces.

Hermann Rauschning, a friend of Hitler and compiler of his speeches, said: “One cannot help thinking of Hitler as of a medium, the medium is possessed. Without any doubt, Hitler was possessed of forces which were beyond him and of which the individual called Hitler was only the temporary instrument.”