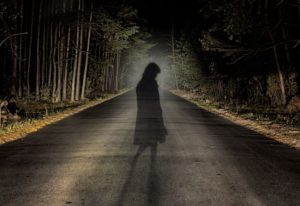 Over the past four decades rumors have circulated intermittently about ghostly appearances in the vicinity of Norah head Cemetery, Jenny Dixon Beach, and a section of Wilfred Barrett Drive on the NSW Central Coast – Australia.

One story, set in the 1970’s, tells of a teenage girl heading home from work when she was pulled into a car and viciously attacked and raped by five youths. She was later found barely alive in bushland at Jenny Dixon Beach, but died as a result of her injuries. On her death bed, she told her father she wouldn’t rest until her attackers were found and punished.

Police never charged anyone with the crime, but five youths who were frequently in each others company died under bizarre circumstances during the following years.

The first ghostly appearance was reported not far from Norah Head Cemetery shortly after the girl’s burial. Within weeks, sightings of the girl had increased, and after each event her grave was disturbed.

A short time later, a young man suspected of being involved in the girls death hung himself after complaining of being continually harassed by a spirit.

The same year, his friend – and some believe accomplice – was fatally injured in a car accident. Before he passed away he claimed someone had walked in front of his vehicle – but witnesses saw no-one.

The third member of the group to die in mysterious circumstances drove his car off a cliff after confessing that an apparition had been torturing him.

The bizarre scenario continued when a fourth youth picked up a hitchhiker on Wilfred Barrett Drive. By the time he had reached Noraville Road, the girl had disappeared. He reported the incident, but was cruelly ridiculed, and soon began showing signs of madness. He later ran his car over an embankment on the Pacific Highway and died.

A similar scenario was in store for the final victim. He had complained to his sister of being ‘constantly haunted.’ He later left the district to work for a circus in an effort to escape the torment – but it followed him.

He often told of ‘seeing things’ day and night and later ended the nightmare by taking his own life with a shotgun.

The ghostly story made headlines again when a visiting doctor picked up a hitchhiker on Wilfred Barrett Drive while holidaying in the area. He knew nothing of the local legend. He told police the hitchhiker disappeared as he approached Noraville Road. The distraught Physician later sought psychiatric counseling.

Today, stories of the mysterious spirit still circulate throughout the Central Coast. Not so long ago, two police officers told of picking up a hitchhiker on Wilfred Barrett Drive during the early hours of the morning. Again the young female had disappeared upon reaching Norah Head Cemetery.

Joanne Feeney of the Central Coast is fascinated with the story. ‘I actually spoke to quite a few older residents regarding their thoughts on the legend – and one old chap – Ken Salladine – vividly recalled picking the girl up on Wilfred Barrett Drive about forty-years-ago. He was talking to her, and after receiving no response glanced into the backseat and she was gone.

‘It’s a well known among locals in the area that the girl was kidnapped on that stretch road then raped and left for dead in the bushland at Jenny Dixon Beach. The stories are all too similar to be made up, and every story always states that she strolls along Wilfred Barrett Drive possibly in search of her killers – but always disappears near Norah Head Cemetery.’

Another strange twist is that she always sits in the rear of the vehicle – never the front. And after she vanishes there is often a lit cigarette on the backseat.

The girl’s murder still remains unsolved. It is also widely believed there is still one person connected to the crime who managed to escape the young girl’s wrath by fleeing the area. Perhaps this is the person she continually seeks.

Harry Martindale and the Roman Ghosts of York