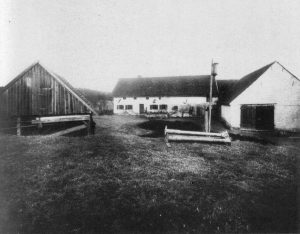 Hinterkaifeck, a small farmplace located between the Bavarian towns of Ingolstadt and Schrobenhausen (approximately 70 km north of Munich), was the scene of one of the most strange and mysterious crimes in German history. On the evening of March 31, 1922, the six residents of the farm were killed with a mattock. The murder is still unsolved.

The six victims were the farmer Andreas Gruber (63) and his wife Cäzilia (72); their widowed daughter Viktoria Gabriel (35) and her two children, Cäzilia (7) and Josef (2); and the maid Maria Baumgartner (44). The two-year-old Josef was stated to be the son of Viktoria and her father Andreas, who had an incestuous relationship.

Several days before the crime, farmer Andreas Gruber told neighbours about discovering footprints in the snow leading from the edge of the forest to the farm, but none leading back. He also talked about hearing footsteps in the attic and finding an unfamiliar newspaper on the farm. Furthermore, the house keys went missing several days before the murders, but none of this was reported to the police.

Six months earlier, the previous maid had left the farm, claiming that it was haunted; the new maid, Maria Baumgartner, arrived on the farm on 31 March, only a few hours before her death.

Exactly what took place on that Friday evening cannot be said for certain. It is believed that the older couple, as well as their daughter Viktoria and her daughter Cäzilia, were somehow all lured into the barn one by one, where they were killed. The perpetrator(s) then went into the house where they killed two-year-old Josef, who was sleeping in his cot in his mother’s bedroom, as well as the maid, Maria Baumgartner, in her bedchamber. 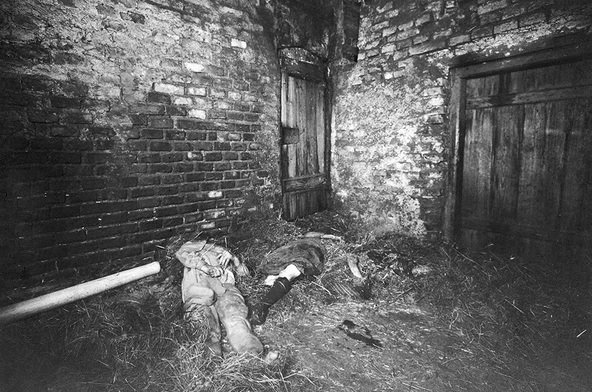 On the following Tuesday, the 4th of April, some neighbours went to the farmstead because none of the inhabitants had been seen for several days, which was rather unusual. The postman had noticed that the post from the previous Saturday was still where he had left it. Furthermore, young Cäzilia had not turned up for school on Monday, nor had she been there on Saturday.

Inspector Georg Reingruber and his colleagues from the Munich Police Department made immense efforts investigating the killings. More than 100 suspects have been questioned through the years, but to no avail. The most recent questioning took place in 1986, fruitlessly. In 2007 the students of the Polizeifachhochschule (Police Academy) in Fürstenfeldbruck got the task to investigate the case once more with modern techniques of criminal investigation.

They came to the conclusion that it is impossible to completely solve the crime after that much time had passed. There is a lack of evidence because the investigation methods then were rather primitive. In addition, evidence has been lost and the suspects have since died. Nevertheless, the students were able to identify one person as the main suspect. They do not directly name that person in the report, however, out of respect for still-living relatives.

To this day, many hobby investigators continue to investigate the case.

The police first suspected the motive to be robbery, and interrogated several inhabitants from the surrounding villages, as well as travelling craftsmen and vagrants. The robbery theory was, however, abandoned when a large amount of money was found in the house. It is believed that the perpetrator(s) remained at the farm for several days – someone had fed the cattle, and eaten food in the kitchen: the neighbours had also seen smoke from the chimney during the weekend – and anyone looking for money would have found it.

The death of Karl Gabriel, Viktoria’s husband who had been reported killed in the French trenches in 1914, was called into question. His body had never been found.

The following day, on the 5th of April, court physician Dr. Johann Baptist Aumüller performed the autopsies in the barn. It was established that a pickaxe was the most likely murder weapon. The corpses were beheaded, and the skulls sent to Munich, where clairvoyants examined them without result. The autopsy also showed that the younger Cäzilia had been alive for several hours after the assault. Lying in the straw, next to the bodies of her grandparents and her mother, she had torn her hair out in tufts.

The six victims are buried in Waidhofen, where there is a memorial in the graveyard. The skulls were never returned from Munich, after being lost during the chaos of WWII. Close to where the farm was located, there is now a shrine.

The farm was destroyed the following year, in 1923.

I realized that there is a Devil: Conjuring the Satan