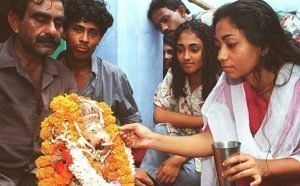 The Hindu milk miracle was a strange event that took place September 21, 1995 in south New Delhi. A Hindu worshiper offered a spoonful milk to an idol of Ganesha, a deity in the Hindu religion with an elephant head.

The worshiper was astonished at what happened next. The milk in the spoon when touched to Ganesha’s trunk appeared to be drunk by the idol. The worshiper attributed the disappearance to the milk as being taken by Ganesha.

Soon the account of this astonishing miracle traveled by word of mouth from believer to believer and soon it was quickly discovered that idols of all the Hindu gods were taking offers of milk in a similar fashion.

Slowly, as word of the miracle spread to other countries. Hindu temples in the United Kingdom, Canada, UAE, and Nepal along with other countries were successfully able to replicate the phenomenon.

After the reports of successful replication came in the Vishva Hindu Parishad (an Idian Hindu organization) officially confirmed that a miraculous event was occurring. In the United States of America, the phenomenon was observed at the Hindu Temple Society of North America (Ganesh Temple).

The Milk Miracle triggered traffic jams around temples around New Delhi lasting for hours. Queues at temples in New Delhi extended over a mile into the streets, causing smaller temples to struggle with the increased numbers.

Around the world neighborhoods with high numbers Hindus an impressive increase in milk sales. A supermarket in Britain reported selling 25,000 pints of milk. 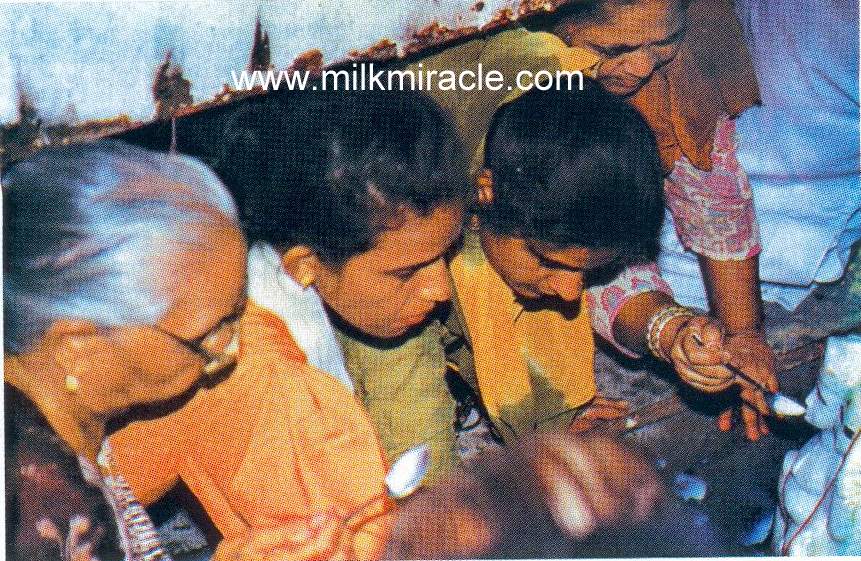 Though a scientific explanation had been proposed, this did not reduce the number of devout believers standing in line for hours waiting to make their offering of milk. The explanation offered by India’s scientists was capillary action.

Capillary action is the ability of a liquid in a narrow space to flow against gravity due to its’ surface tension. Simply put, the scientist contend that capillary action was pulling the milk out or the spoon when it was touched to the idol. Then gravity would take over and it would run down the front of the idol.

But there are problems with the capillary explanation. First is the shear volume of milk involved. As mention earlier one British supermarket reports sell 25,000 pints of milk on the day of the miracle.

Now making a very conservative estimate that one teaspoon was offered would mean that 32 gallons of milk were spilled at local idols. But when one looks at the videos of the event there appears to be very little evidence of spilt milk. Second, devout believers point to the fact that many idols stopped taking milk before noon and by October no idols would take milk.

But the main problem with the capillary explanation is the shear volume of milk involved. Yet when all else fails skeptics simply write the event off to mass hysteria spurred on by the coverage it receive by news outlets around the world.

The event was extremely popular with news networks because reporters could travel to the temples to experience this “miracle” for themselves. Media coverage of the event was extensive with several reporters and journalists from different countries investigating the phenomenon.

Even though reporters were aware of the scientific theories that credited capillary absorption and mass hysteria, the overwhelming reports seemed to conclude that the miracle was indeed genuine.

Even known cynics were amazed by seeing the event in person. A Delhi business woman, Mabati Kasori, was interviewed and said that she heard the story and thought it was rubbish, “…but then I did it myself. I swear that the spoon was drained.” She and several others became convinced after trying for themselves to find that it was just as the reports said; the statues were seemingly drinking the milk.

The press struggled to reconcile the rational explanations for the event with what they were witnessing, but many devout Hindus believed that they knew the answer. The devout believed it was an omen foretelling that a great spirit had been born and descended to earth.

Their teachings say when evil takes hold on earth a being similar to Lord Krishna or Jesus Christ will arise to combat the evil.

To date, there are still no officially accepted rational explanations for the event and many of the religious still hold that it is a miracle. The scientific explanations have also been scrutinized because of the amount of liquid reported to be held in the statues and also the theory relying on specific materials to be accomplished. Is it a miracle? Perhaps we will never know.