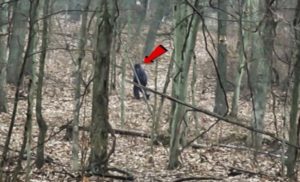 A pair of hikers said they captured the legendary Bigfoot on camera in a video that was startlingly clear.

The hikers who saw the hairy man said they heard “many weird noises” while walking at Salt Fork State Park last month, until they came across a mysterious figure. A large hairy creature can be seen walking slowly in the background in the mysterious clip.

Then one of the hikers’ whispers: “Did you see that? Should we even be here? The sounds you are gonna hear next are absolutely bone-chilling.”

They characterized the creature as something resembling Bigfoot –a hairy upright-walking, ape-like creature living in the forest.

More than 36 similar sightings have been documented in the same park since the mid-80s, but researchers have already dismissed Bigfoot’s presence, finding it to be a mixture of myth, misidentification and hoax.

There are three sites at Salt Fork State Park where a bigfoot is said to have been spotted: Parker Road, Morgan’s Knob, and Bigfoot Ridge.