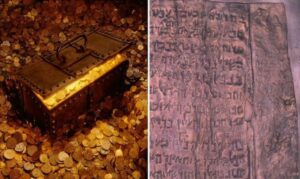 In 1952, an archaeologist named Henri de Contenson discovered two mysterious scrolls in an highly oxidised condition known as the Copper Scroll when he was leading a team of ten Bedouin in a hillside cave, a few kilometers from Qumran.

When it was first found in the cave, it had broken into two separate rolled up sections side by side on a stone. One larger part contained two similar sheets riveted together end to end while the other roll is a single sheet of hammered copper.

The Copper Scroll are part of the Dead Sea Scrolls, however unlike other scrolls which are literary work and written on papyrus, these scrolls contain several locations of hidden treasures and written on thin copper.

At that time, no one dare to open the scroll without damaging the text inside it. Several years later in 1955, with great care, one of the Copper Scroll finally opened by H. Wright Baker, a Professor at Manchester College of Science and Technology (UMIST). The other scroll also opened a year later in 1956.

Because the corroded metal couldn’t be unrolled easily, Professor Baker cut the scroll into 23 parts.

The language itself was a big puzzles for scholars. It was written in a square form script (an early form of Hebrew script) while other Dead Sea Scrolls were written in square form Aramaic script, or ‘Paleo-Hebrew’ script.

The style of script and the spelling in the Copper Scroll is very different with other texts of the time, from Qumran or from elsewhere. But still, It has been almost unanimously classified as one of the Dead Sea Scrolls.

John Allegro is the first person who translated the Copper Scroll into English. And he realize that the scroll is a list of around 64 locations of magnificent hidden treasures including massive quantities of jewelry, precious gems, other scrolls, gold and silvers.

However the Jerusalem team advised him to not publish his findings publicly, because it can attract treasure hunters around the world and disturb the Qumran site.

At the end of 1959 and in March 1960, Allegro decided to lead two archaeological expeditions in search of the Copper Scroll’s treasures. For several months of expeditions, he wandered around in the desert and found nothing. A few months later, he decided to published the English translation of the scroll (The Treasure of the Copper Scroll) in 1960. 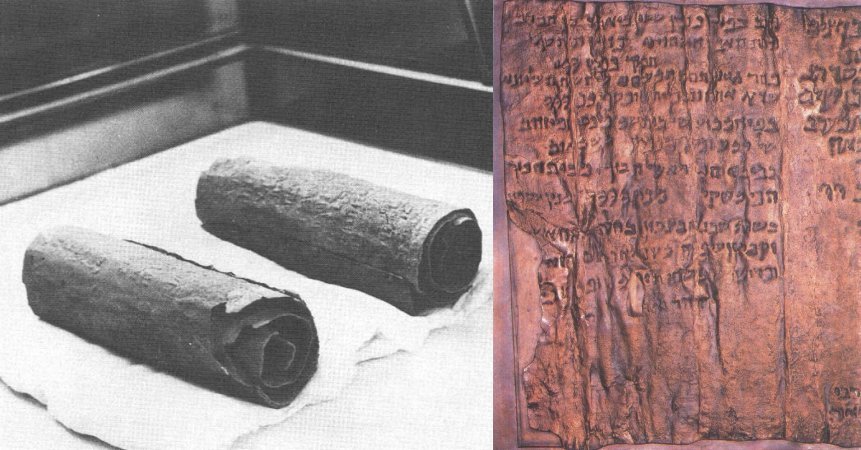 Various reactions came from the scholars after reading the Allegro’s translation. Father Joseph Milik, one of the member of the original Dead Sea Scrolls translation team and Father P’ere de Vaux, the head of the École Biblique et Archéologique Française de Jerusalem, denounced it as defective and even cast doubts on the authenticity of the Copper Scroll’s contents.

While others were not so sure, and today the generally accepted view is the Copper Scroll contains a genuine list of real treasures.

In 1962 the Jerusalem team published the official Copper Scroll’s translation with the title ‘Les “Petites Grottes” de Qumran, in the Discoveries in the Judaean Desert series. In conventional translations of the Copper Scroll the weight of gold mentioned in various locations is generally given as adding up to a staggering 26 tonnes and silver 65 tonnes.

According to the Copper Scroll Project, the treasures listed on the scroll probably span the history of Israel from the Exodus to the Babylonian captivity. The talents of precious metals and gems may very well be the excess materials called for by Moses and Aaron to build the Tabernacle.

Then there are the supplies stored away by King David for the 1st Temple. Yet on the scroll it speaks of tithes and offerings of silver. Those could easily be from the Temple built by King Solomon and stored away for repairs and upkeep on the House of God stored in the remote treasury at Qumran.

The treasury described in the document is, the long sought after treasury of Hakkoz known for centuries to be in the area of Qumran. However, it is unclear when the treasury was built.

More significant is the fact none of the conventional theories have led to the discovery of any of the treasures listed in the Copper Scroll. Until now the Copper Scroll’s treasure is still hidden somewhere while the Copper Scroll itself is housed at the Jordan Museum in Amman, Jordan.