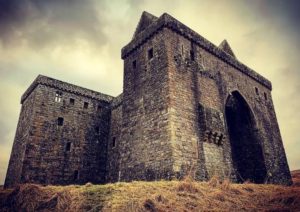 Murders, torture, treason, warlocks and ghosts! This is not some fairy tale, but the history of one of the UK’s most evil castles.

Hermitage Castle is over 400 years old and is situated in the Scottish Borderlands in Liddesdale. The history of the Borders is a bloody and traumtic one. Age old feuds and battles with the ‘auld enemy’ England regularly erupted.

The Scottish Borders were divided into three areas called ‘marches’. Hermitage held a powerful and strategic position, controlling the ‘Middle March’. Hermitage was also described by author George MacDonald Fraser as ‘the guardhouse for the bloodiest valley in Britain’ (from ‘The Steel Bonnets. A History of the Border Reivers’).

Even from it’s beginnings in the 13th century this castle was destined to be a place of evil deeds. A constant theme of death and destruction continues throughout its dark history.

An original building was started in the 1240’s by Lord de Soulis, but the structure we see today was the work of William, 1st Earl of Douglas, in the 14th century.

The Warlock of Hermitage Castle

The evil reputation that Hermitage built up over the centuries is well founded. Not only was the castle involved in war but it was also the jail for numerous prisoners. Many of these unfortunates were brutally tortured before their deaths. The malevolent repute is intensified by the castle having it’s own warlock – a practioner of the dark side of the occult.

De Soulis was not only a warlock but was also lord of the surrounding countryside. In these far off days, his power in the area would have been absolute, answering only to the king.

De Soulis is reported to have been an extremely tall man and well built. He was also arrogant, power hungry and evil. He is reputed to have ruled with oppression and cruelty. Numerous acts of torture are alleged to have been carried out on prisoners and locals. But the biggest fear was that de Soulis was a Warlock. His dark powers were said be the source of his power. 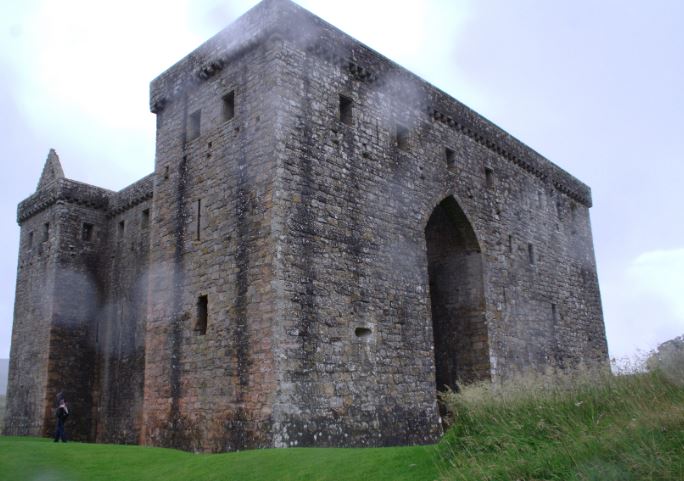 He is alleged to have kidnapped local children and used them in blood rituals. The blood was used to invoke a demonic helper known as a powrie or dunter. This is a form of legendary, evil goblin that haunts the borderlands.

They occur particularly in ruined castles and where deaths were numerous. De Soulis called his demonic aid ‘Robin Redcap’. This evil goblin is said to have killed many travellers who wandered too close to the castle.

But eventually people were driven to act. One legend states that William de Soulis was boiled alive in a huge cauldron. This had been set up nearby in an ancient stone circle. The legend comes from a ballad written by an unknown author – probably in the 18th century:

However, there is good evidence to suggest that William de Soulis actually died a prisoner in Dumbarton Castle.

Murders in the castle

Hermitage has witnessed much bloodshed over the years – including murder. Two of the most infamous involved young men, only a few years apart, both named Alexander.

The murderer of this brave young knight was the Warlock of Hermitage – Sir William de Soulis. Sir Alexander saved de Soulis from attack from an angry mob and escorted the terrified lord back to Hermitage. However, de Soulis, enraged at needing help and jealous of Sir Alexander’s popularity, he took revenge.

He invited Sir Alexander to dine with him and when the young man’s back was turned, de Soulis stabbed him with a dagger. This is the indcident that reputedly led to de Soulis being boiled alive in a cauldron.

However, he was arrested and sent to Dumbarton Castle after plotting against the King – Robert the Bruce. De Soulis died in Dumbarton Castle, but so turbulent were the times that he was never charged with Sir Alexander’s murder.

The holder of Hermitage Castle in 1338 was one of the Douglas clan – Sir William Douglas, the Knight of Liddesdale. He was admired for his bravery in war. However, he was less than chivalrous off the battle field.

To a one time friend and war time companion Sir William commited an act of atrocious cruelty. Sir Alexander Ramsay was another knight admired for his bravery and chivalry on and off the battle field. King David II – son of Robert the Bruce – was very pleased with Sir Alexander.

The knight had captured back Roxburgh Castle from the English. In gratitude, King David made Sir Alexander, Sheriff of Teviotdale. William Douglas, seething with anger and jealousy, captured Sir Alexander and put him in the deepest dungeon in Hermitage. This dungeon was reported to have been nothing more than a horrible black pit.

Here, one of the bravest knights Scotland had was slowly starved to death. So powerful were the Douglas clan that even the King was not in a position to punish Sir William. However, Sir William was later killed by his godson – another William – for treason.

It was discovered that not only was Sir William a murderer but he was plotting with the English to overthrow King David II. Many believed that he had a last received just reward for the murder of Sir Alexander.

In the 1800’s stone mason’s restoring the castle, broke through a sealed up dungeon. In the tiny compartment they found a skeleton, hunched over a rusty sword. The remains are thought to be that of Sir Alexander Ramsay.

The Ghosts & Demons of Hermitage Castle

Not surprisingly there are hundreds of accounts of ghostly and other paranormal manifestations at Hermitage Castle. Here are just a few:

Children/adults crying and sobbing. These sounds have been reported numerous times over the years. It is alleged by some that the children heard are those used in the black rituals of William de Soulis. The adults could be any of the hundreds who were tortured and died over the centuries at Hermitage.

Demonic laughter. This hideous and evil laughter is reported as often as the crying and sobbing. It is heard most often at night coming form the deserted castle. Whether the laughter is that of de Soulis (or perhaps Robin Redcap?), no one knows for sure. De Soulis’s dark presence has also been felt in and around the castle.

Robin Redcap – the demonic familiar summoned by William de Soulis. Is believed by many to haunt the ruins and surrounding land of Hermitage. There is a legend that every seven years de Soulis meets up with his demon goblin. The reunion has been described in a ballad:

“And still when seven years are o’er,
Is heard the jarring sound,
When hollow opens the charmed door
Of chamber underground .”

The Drowning Pool. Just north west of the castle is a large mound next to the ruined chapel. Legend states the mound was the grave of a giant called Cout Kielder. He was believed to have worn magical armour.

He met his end by drowning in the pool next to the mound. Stories relate how he was immune to many weapons but not against water. Witnesses have reported the frightening experience of being pushed towards the pool when no one was near them.

Sir Alexander Ramsay. The gallant knight is the ancestor of the present day Earl of Dalhousie and we have already discussed his horrible death. His ghost is believed to haunt the castle. People have reported hearing his screams and pitiful cries for help. A very thin man, his face almost skeletal, has been seen by many witnesses. This sad apparition is thought to be the spirit of Sir Alexander.

Mary Queen of Scots. In the 16th century Mary Stuart was Queen. Her third husband James Hepburn, Earl of Bothwell owned Hermitage at this time. The Queen is said to have visited him at the castle after he sustained a severe injury. Queen Mary nursed the handsome nobleman back to health. Her apparition, wearing a long white dress, has been seen on seen on a number of occasions.