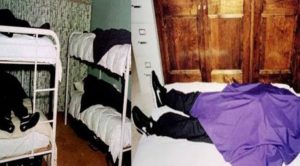 On March 26, 1997, police happened upon a harrowing scene at a hilltop mansion in an exclusive San Diego, California neighborhood; they had been given an anonymous tip that a mass suicide had taken place at the palatial estate.

The dead bodies of 39 members of a religious cult known as “Heaven’s Gate” were discovered in nearly every room of the residence. One detective described the bodies as being “stacked up like cordwood”, each one being draped in a purple cloth that covered the face and chest of the deceased.

The victims were all dressed identically, each wearing black long-sleeved shirts, black sweatpants and black-and-white Nike tennis shoes. On the left shirt sleeve of each victim was a patch that read “Heaven’s Gate Away Team”.

The victims, whose ages ranged from 26 to 72, died in a meticulously orchestrated mass suicide, with all forensic signs pointing to the conclusion that they had committed the act willingly.

Each member of the Heaven’s Gate cult had ended their own life by consuming pudding or applesauce laced with a combination of phenobarbital (a toxic central nervous system depressant) and vodka.

Along with their deadly final meal, victims also tied plastic bags around their heads, evidently to speed up their deaths by way of asphyxiation. It was initially believed that all of the cult members were male due to the fact that each one was dressed alike and had close-cropped hair, but it was later discovered that 21 of the 39 victims were female.

Included in the death toll was Marshall Herf Applewhite, the leader of the Heaven’s Gate cult, who had convinced his followers that by committing suicide, their souls would be teleported into an alien spaceship that was flying behind the Hale-Bopp Comet that appeared in 1997.

Suicide as a Means to Avoid the “Great Recycling”

Applewhite, who was also referred to as “Do” (pronounced “doe”), repeatedly claimed that planet Earth was about to be “recycled” or “wiped clean”, meaning that there would be a complete annihilation and then subsequent renewal of the planet by way of extraterrestrial forces.

According to Applewhite, the only way to survive this event would be to leave the planet immediately. The preferred method to accomplish this escape was suicide, although Heaven’s Gate members considered the word “suicide” itself to be a highly subjective term.

According to their own website, the “true meaning” of suicide is to “turn against the Next Level when it is being offered”. In the parlance of the Heaven’s Gate cult, the “Next Level” (also referred to as the “Level Above Human”) was defined as a higher level of existence that could only be attained by way of the human soul exiting its current “vehicle”, i.e., the physical body.

To put it another way, members of the cult believed that the only way to enter the Next Level was through physical death, and to deny yourself the “opportunity” to enter into the Next Level through the “willful exit of the body” was the only “true” suicide there is.

This convoluted concept of suicide was just one of the many elements of the deranged belief system to which members of Heaven’s Gate were subjected at the hands of the cult’s leadership. The group was founded in the 1970s by Applewhite and Bonnie Nettles (known by cult members as “Ti”), a nurse who attended to Applewhite during his stay at a mental hospital.

Applewhite had a history of mental illness, and had checked himself into various mental institutions several times throughout his adult life. After developing a close friendship, the two agreed that they had met in a former life, and by the mid-1970s, they had formulated a set of beliefs that gave birth to the notion that they were to play an instrumental role in the fulfillment of biblical prophecy.

One of the prophetic roles that the duo believed they were to assume was that of the two witnesses mentioned in the Book of Revelation (11:3). Applewhite and Nettles eventually referred to themselves as “Bo” and “Peep”, an allusion to their self-proclaimed status as “Shepherds” who were sent to Earth to train other people regarding how to attain to the Next Level.

The duo eventually began to publish advertisements for seminars as a way to recruit followers. During their meetings, they would refer to themselves as extraterrestrial beings from another planet who were here to teach ordinary humans how to live on a higher plane of existence.

After holding seminars at a handful of college campuses, the two found moderate success, recruiting nearly 50 members into the cult. Their fringe beliefs found an audience among New Age enthusiasts in particular. Donations and subsequent additional members followed, allowing the cult to flourish and establish bases in cities such as Denver and Dallas.

Nettles Exits Earth and Goes to the Next Level

After a multi-year battle with cancer, Bonnie Nettles passed away in 1985. Her passing was explained by Applewhite to the cult as a transition to the Next Level in which Nettles had too much energy to bring her body with her for the journey.

Applewhite subsequently experienced bouts of depression, but was encouraged by fellow cult members to stay the course. Eventually, Applewhite began to refer to Nettles as his “Heavenly Father”, and claimed that Nettles was actually far superior to himself in terms of her spiritual status and position.

Applewhite eventually claimed to be the embodiment of Jesus on the Earth, asserting that none of his followers would be able to attain salvation without a relationship with him. As time went on, Applewhite began to encourage his followers to shun all elements of “worldliness”, including employment, money, individuality, and sex.

Sexual contact was forbidden for members, and the role of gender was downplayed as a means to avoid temptation; this was one of the reasons for the identical haircuts and outfits of all cult members.

Applewhite, along with six other members of the cult, took the concept of sexual indifference to the extreme by volunteering to be castrated in order to abstain from sexual distractions. The group ended up having to travel to Mexico to carry out their intentions when they could not find a doctor in America who would agree to perform the procedure.

The advent of the Internet brought a new recruitment avenue for Heaven’s Gate, as well as a more accessible way to share their fringe beliefs. The group posted an “Exit Press Release” on their website dated March 22nd, 1997 that was obviously intended to be read posthumously.

The press release claimed that the group had collectively “exited” their bodies, and were now dwelling in the “Kingdom of God”. The physical aftermath of the mass suicide left evidence that the deaths had been performed in shifts over a three-day period, beginning on March 24th and ending on March 26th.

On March 25th, 1997, Rio DiAngelo, a member of Heaven’s Gate who was on leave from the group, received a FedEx package containing a videotaped message from Applewhite along with a note stating that by the time he would read the letter, the group will have already “exited” their “vehicles” (i.e., bodies).

It was later found out that DiAngelo had actually videotaped the mansion in San Diego in 1997, but the footage was not disclosed to the police until five years later.

Many psychologists and cult experts claim that the members of Heaven’s Gate were susceptible to being manipulated by Applewhite due to a variety of factors, including disillusionment with their current lives and a penchant for idealism. Whatever the reasons may have been, the Heaven’s Gate mass suicide was the worst ever to take place on American soil, and serves as yet another example of the dangerous nature of cult organizations.