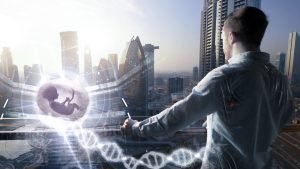 Hawking predicted the extinction of mankind and the emergence of a new race of people.

The warnings to mankind are contained in a book that did not have time to come out during the lifetime of the British physicist.

The English physicist Stephen Hawking, who passed away in March 2018, predicted another threat to humanity before his death – the emergence of a new race of superhumans with superpowers.

Such a warning is contained in the last book of the scientist “Brief Answers to the Big Questions”, which did not have time to come out during his lifetime.

According to The Sunday Times, Hawking predicted that in the future, wealthy people will be able to make changes to their DNA and the DNA of their children, achieving greater resistance to disease, improved memory and intelligence, affecting life expectancy.

According to the scientist, legislative prohibitions on the use of genetic engineering in humans will not be able to keep from the temptation to improve their characteristics.

As a result, people with superpowers will appear on Earth, with whom an ordinary person will not be able to compete. In the end, clashes between humans and superhumans will begin.

“Once such superhumans appear, there are going to be significant political problems with the unimproved humans, who won’t be able to compete,” Hawking wrote. “Presumably, they will die out, or become unimportant.”