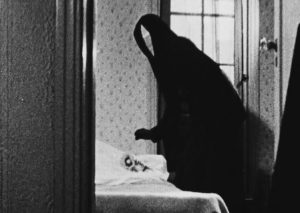 When I was a freshman at Haverford College in 1982-1983, I lived in an old house on campus, formerly known as Woodside Cottage, then known as the Margaret Gest House. This house stood there for several decades prior to the founding of the college in 1833.

It continued to be a functioning farmhouse for a number of years thereafter. I was a “student intern” in a program for the cross-cultural study of religion, and shared the house with an Indian professor of philosophy, his wife and three children. My roommate Jeff and I share the spacious third floor apartment.

It was not long before I noticed an unusual amoung of noise late at night.

I seemed to hear even more noises when under the influence of cannibis. My friend Jeff, not as inclined to alter his mind as I, did not notice anything unusual. I heard voices, footsteps and “mice” – though I never saw one mouse or mouse dropping.

The wife of the professor downstairs had nightmares, an unusual occurrence for her. They ceased when she posted a drawing of the Indian goddess Tara over the bed.

One night I was sitting in my room, stoned and reading the Critique of Pure Reason. I heard a strange grating sound overhead. I looked up and saw the square ceramic plate under the ceiling lamp rotating slowly, counter clockwise.

As it turned, it made the grating noise on the rusty, threaded metal pipe anchored to the ceiling, on which it hung. I called my skeptical roommate over from his room. He was a bit shaken. Yes indeed, it rotated; no, there were no windows open or drafts in the room. (The plate in question must have weighed two pounds at least). I did another bong hit and went back to reading Kant.

The lamp never rotated again, at least not in my presence.

Things got stranger after that. One night around 2:00 a.m. I was studying and I suddenly heard my roommate, who had retired about two hours earlier, shouting and screaming in his room. It sounded like he was having an argument with someone. Then there was an enourmous crash which shook the entire house. I knocked on his door; the light was off, and it was locked.

No answer. I thought Jeff might turn up dead the next day; but when he appeared, he claimed to have no recollection whatsoever of the incident.

Aside from the sound of “squirrels” running in the ceiling, he had witnessed nothing strange, and claimed to know nothing unsual about the history of the house.

After Christmas vacation, I arrived back at school late at night on December 29. I had left my keys there, so I climbed a hemlock tree behind the house, walked across the flat roof of an annex, and went in through a dormer window.

I went to my room; the door was closed. Just before I touched the doornob, there was a loud crash, as though someone had thrown his weight against the door. “Someone’s in there!” I thought, scared half to death. I grabbed the doorknob; the door was locked from the inside.

Shit! I’d locked my keys in the room. I was not about to spend the night on the floor in the living room, so I climbed back down the tree and crashed at a friend’s house. The next day, Security opened my door; the keys were there, the window was closed, and everything was in place.

The family downstairs said they heard footsteps every night in our apartment while we were away on vacation; they even went upstairs to check, but found no one.

These are just the most obvious things; there were plenty of strange vibes and occurrences, some mediated by psychoactive substances, others in plain daylight, in a normal state of mind.

The next year I was away, but stories about the house continued to accumulate. Some Tibetan monks visited the Indian professor and his family.

One of them reported being dragged out of bed in his sleep. Others reported nightmares, and one had the impression someone was sitting on his chest, trying to suffocate him.

The year after that, 1985-1986, a Tibetan professor, himself an adept of Buddhism, Lobsang Lhalungpa, occupied the second storey of the house with his wife. He also had nightmares and awoke to the sensation of being sat upon; a spectral face appeared for a moment. Professor Lhalungpa did several days of ceremonies, and thenceforth there were no disturbances in the house.

In 1991 I finally learned of the probable source of the haunting. I bumped into a former student resident of the third floor apartment where I had lived. He had done a little research in the College’s archives and discovered that a professor of mathematics had lived on the second floor in the 1840’s.

He was caught having an affair with one of his (male) students; disgraced, he committed suicide by hanging himself in the room directly below the one where I observed the spinning lamp fixture. That room was, of course, where the aforementioned nightmares and “smotherings” had occurred.