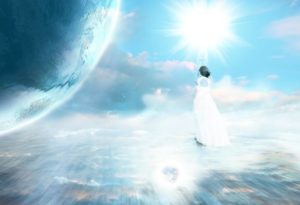 Have you ever met someone and felt that you have known them before? Do you find that you know certain aspects of this person’s personality and yet you have never met before? There is a good reason for this. It’s a strong possibility that you have been together in a previous lifetime. That’s why the connection is instantaneous. The very fact that we are drawn to certain people and certain places is a reflection of the dim memory of previous lives we all possess.

The first time I had this experience was when I was an atheist in my early twenties and I met a man that I knew I had known before in another life. That was quite remarkable considering I had no spiritual beliefs at that time. Obviously I have developed a spiritual belief and understand life after death since my earlier years. Since that first meeting with someone I felt I knew before I have had it happen on other occasions.

When I was working on my doctorate I was allowed to choose any study I wanted to add and I chose to study past lives. I had countless sessions with a past life regression specialist and saw many of my past lives, even though I was an open minded skeptic. Let us go back to this man I met in my early twenties. I eventually married him and he was my second husband. Our entire relationship was combative and ended terribly. I wanted to know where we had met before. So the regressionist took me through the process where I was able to go back in time and see where I had met this man before.

We met approximately 600 years ago and I was an older man with long gray hair and a gray beard, who was an Alchemist, and lived basically as a hermit inside a mountain cave in the northern part of England. I constantly worked on herbal formulations to heal different ailments. I was called upon by these surrounding people to help whenever someone they love was sick and my potions healed many. This man came to me as a young apprentice who wanted to study with me and help go out and heal people like I did.

I was leery of him and took my time showing him the most simple of things to do and I let him practice on animals to see if he really had the healing gift. In time he proved himself to me and I treated him like my son. We worked together for many years until he had learned almost everything I knew. I never fully let him know all of my secrets. Once he felt that he had learned everything from me, he left our cave home and took off to the next country and the city where the King lived.

He managed to get an audience with the King and was able to show him his healing powers. He became the head Alchemist and personal physician to the King. His fame and wealth spanned many countries. I continued practicing as I always had and never took in another apprentice. I lived in my cave alone surrounded only by my animals until my death.

Needless to say this was quite an amazing experience. It really made sense to me because we were always competing with one another in our marriage to see who knew the most and could outdo the other. And he left me abandoned and went off to another country. This was the most astounding past life regression I ever did.

In my other past life regressions I was always a normal person and never someone famous or important. In one I was a blacksmith, another I was a wealthy woman in France deeply loved by my husband and children but died at a very young age; I traveled across the prairie in a covered wagon in the 1800’s, I was a commander in a Middle Eastern army about 3,000 years before and I was a leader who fought and killed many. The last past life we were able to get during the sessions was around the turn of the century into the twentieth century and I was a woman who was a housewife but addicted to opium and eventually died from drug usage.

Many people can say that it’s just a highly active imagination. But many of the great masters and teachers have found that the idea of past lives is very real. According to Hinduism, the soul is immortal, while the body is subject to birth and death. The Bhagavad Gita states that: “Worn-out garments are shed by the body; Worn-out bodies are shed by the dweller within the body. New bodies are donned by the dweller, like garments.”

What Is The Significance Of A Past Life Experience?

Why we are shown a past life often has to do with how we have evolved throughout our different lifetimes. The main reason for reincarnation/past lives is for our soul to grow and learn from each life time.

Reincarnation can happen in linear time. Your next life may actually occur in the past! How is that possible? Because your innermost spirit/soul exists outside of time and space (reference The Time Space Continuum) and can travel to wherever and to whenever it wants. The findings of quantum physics increasingly support Plato, who taught that there is a more perfect, non-material realm of existence.

Ravi Shankar the famous sitar player, who taught George Harrison of the Beatles how to play the sitar, was born with a scar from one side of his neck to another. As soon as he was old enough to talk he recalled being horrifically decapitated as a child, in another lifetime, by a relative who was hoping that he would inherit the child’s father’s wealth. When his claim was investigated it was found that the person he claimed to have been, did in fact die by decapitation.

American mystic Edgar Cayce who considered himself to be Christian promoted the theory of both reincarnation and karma, but they act as instruments of a loving God as well as natural laws – the purpose being to teach us certain spiritual lessons.

General George S. Patton was a staunch believer in reincarnation. In particular, Patton believed he was a reincarnation of Carthaginian General Hannibal. He felt that he won many of his battles because he could see them before they happened.

There are endless books written on this subject and I have given you some examples above. The bottom line is to keep an open mind and realize that spiritual truths go way beyond what we can think of in our limited capacity. If you would like to have a past life session, call me and we will arrange a time for you to go back in time.

Cherokee Billie offers help through the lens of clairvoyance, self-help, wisdom, philosophy, and spirituality. Cherokee Billie is the Author of “Heavenly Seduction” an Amazon.com best seller. In addition, Cherokee Billie is a Naturopathic Doctor (twenty years experience) Life Strategist, a Radio Personality, and an Ordained Minister leading people to a pathway to spiritual enlightenment. www.cherokeebillie.com