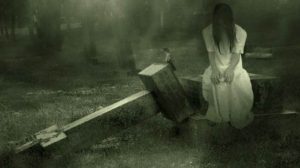 A haunted place is a location often visited by unseen forces or apparitions that may be accompanied by movements, shadows, sounds or uncomfortable feelings.

There has long been a controversy over how to interpret unseen occurrences that are troubling and unexplainable. These unusual phenomena include the appearance of unusual lights, shadows, movements, sounds, noises, and voices, cold and wind, brushing of the shooulder, and the feeling of eeriness or unexplained uneasiness.

Some people have sought scientific explanations for unusual phenomena which would include such natural forces as electricity, gravitational forces, carbon monoxide, and other unseen but normal earthly forces at work.

Other people choose to view these same unusual occurrences as paranormal or otherworldly visits from the dead or from some other dimension. Ghostly specters and unnerving unseen forces are interpreted by many as hauntings and visits from restless ghosts, or even as demonic possessions.

There is a long human history of interpreting unseen phenomena as supernatural or paranormal forces, which are believed to affect people’s lives in various ways. Some regard selected supernatural forces as requiring mediating rites to cleanse the area of a haunting or a person from demonic possession.

The interpretation of these unusual forces and their import may vary greatly between cultures from the mundane, to the meaningful, to the frightening to the harmful. There are also different cultural anthropological theories regarding people’s perspectives of the supernatural. Studies in folkore also approach people’s interpretations of supernatural experiences.

Ghostly and haunted paranormal phenomena are often believed to be tied to the shock of a violent or untimely death of a person who is reaching out beyond the grave to communicate with the living. A restless ghost may be harmless or may be malevolent.

The definitions of “haunted place” and “ghost” from a western cultural and traditional point of view are:

– a haunted place is a location inhabited by an apparition or ghost, or seems to have movements or sounds created by a ghost or ghosts

– a ghost (or apparition) is a “spirit,” or person who was previously alive but has passed on to the other side, and in a restless state tries to communicate with the world of the living

A haunted place is often perceived as being inhabited by disembodied spirits who may have been former residents or familiar with the property in some way, and who are able to interact with the living.

Supernatural activity inside homes is thought to be linked with violent or tragic events in the past of the house, such as murder, accidental death, or suicide.

In 2005, Gallup polls conducted in three countries—the United States, Canada, and Great Britain—showed that more people believe in haunted houses than any of the other paranormal items tested, with 37% of Americans, 28% of Canadians, and 40% of Britons believing in haunted houses.

Carbon Monoxide as an Explanation for Perceived Hauntings?

Some of the phenomena generally associated with haunted places, including strange visions and sounds, feelings of dread and the inexplicable death of the occupants, may be attributed to carbon monoxide poisoning.

In one famous case, carbon monoxide poisoning was caused one “haunting.”. Dr. William Wilmer, an ophthalmologist, described the experiences of one of his patients in a 1921 article published in the American Journal of Ophthalmology.

A couple moved into a new home, but soon began to complain of headaches, began to hear bells and footsteps during the night, soon accompanied by strange physical sensations and mysterious figures. When they began to investigate, they found the previous residents had experienced similar symptoms.

Upon examination, their furnace was found to be severely damaged, producing carbon monoxide and forcing most of the fumes into the house rather than up the chimney. After the stove was fixed, the family fully recovered and did not experience any further unusual events.

By Paula I. Nielson