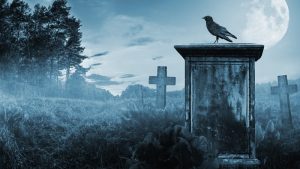 As Victoria grew, some of the ancient burial grounds were covered over by buildings and restless spirits are still present. Some of the older cemeteries are haunted by famous citizens and a few that are unknown. For whatever reason, these sites continue to be haunted.

Pioneer Square is also known as the Old Burying Ground. From 1855 to 1873, it was the graveyard for the town. Thousands of bodies were laid to rest and small tombstones still remain. In 1873, the Ross Bay Cemetery was opened and that became the new town’s burial ground.

Two spirits have been sighted at the Old Burying Ground. One is Adelaide Griffin who died in 1861 and she wanders around the grounds. The other is founding father Robert Johnson who slit his throat in a house across the street in the 1870s. He is usually seen with a barber’s shaving blade in his hand and going through the motions of cutting his throat.

Ross Bay Cemetery is the final resting place for many famous people of Victoria and the scene of several ghosts. The spirit of Isabella Ross can be seen, usually looking out over the water. She owned the land where the cemetery was built.

There is also the sighting of an unknown lady dressed in white. The misty clad apparition of David Fee is spotted from time to time. He was murdered outside of St. Andrew’s Cathedral in 1890 on Christmas Eve.

The ghosts of a couple dressed in Victorian clothing have been seen floating around the west side of the cemetery. Visitors have sometimes spotted a lady darting around in a panic looking for her lost child.

In 1918, an old bridge fell into disrepair near the old Craigflower School. During the excavation for a new bridge, several human bones and a skull were unearthed. They were brought into the school and stored in a box. This seemed to cause paranormal activity.

The kitchen door would open and close and its own and there was a cool wind inside the building. After the bones and skull were given a proper burial, the activity stopped. Over 50 years later, strange activities started up again.

Unexplained voices were heard and a resident dog would get agitated at invisible beings. It was discovered that the school was built on the site of an Indian burial ground.

The Victoria Golf Course is known for the murder of Doris Gravlin in 1936. It was alleged that she was strangled by her husband who later committed suicide. Her ghost is usually spotted at the seventh fairway, which was the murder scene.

Sometimes she can be seen dressed in white or in a wedding gown and shrouded by mist. Other times her presence is manifested by twinkling lights or a pulsating globe of light.

She has also been seen wearing a brown suit and this is usually the most vivid image of Doris. Her apparition can also be seen crossing the street and passing directly through the cars. This has created havoc in traffic.

If you are visiting Victoria, include a Cemetery Tour in your plans. It is worth your while!