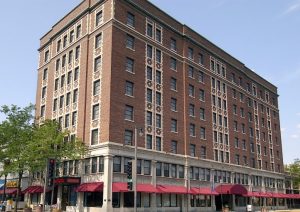 The Ramada Plaza Hotel, formerly the Hotel Retlaw, named for WalterSchroeder who built the hostelry in the 1920s. Retlaw is Walter spelled backwards. The hotel was sold and converted into a psychiatric facility and then, a nursing home before it was returned to its original status as a hostelry.

It’s said there are subterranean tunnels leading to the cellar that gangsters used to enter the building, a ballerina jumped out of a seventh floor window and a man hanged himself on the second floor where the ballroom is now. The hotel staff keeps a log of the ghostly activity.

In life, Walt was a generous gentleman and a charitable philanthropist who donated money to libraries and other nonprofit organizations. Rumor is that Walt was murdered in the hotel and his specter resides there.

The paranormal incidents are centered in and around room 717. In 2001, guests and staff members heard screams emanating from the room. When they tried to unlock the door, the key didn’t work. The sounds continued, and the door was moving as if someone was forcefully kicking it from the inside.

When the key finally worked and the door opened, they discovered the room was vacant and there were no marks on the door. People have felt tingles on their backs and their hair being pulled. Lights and faucets are turned on and off.

The channels on the television are often changed, most frequently to C-Span. Witnesses reported hearing banging on walls. Although the incidents are not characteristic of the man, many believe the haunter is Walt.

Ghostly Manifestations in the Ramada Plaza

There are reports of people hearing a strange humming and sighting a glow in one of the smaller banquet rooms. Spectral figures roam the halls. Disembodied male voices are heard around the clock. Phantom footsteps follow guests and staff. Unseen bodies bump into people. There’s a ghost of a man who walks into the hotel’s walls.

A beautiful redheaded woman wearing a white bathrobe appears to be startled when seen and immediately disappears into one of the halls. The chandelier in the ballroom inexplicably sways and trembles. An employee who heard a noise in the room, investigated and saw a couple dancing, then vanish.

This happened to another staff member who fled down the hall and heard lockers in the locker-room shaking.

Lodging in the Ramada Plaza Hotel

The hostelry is listed on the National Register of Historic Places. People can enjoy sumptuous food and drink in the hotel’s fine-dine restaurant, Cibo Steaks & Spirits and sip potable spirits in the TruBlu Lounge. Guests can dance in the haunted Crystal Ballroom.

Guests may experience the paranormal activity in the establishment. Ghost hunters might enjoy the ghostly antics, although this activity has been known to scare some experients.