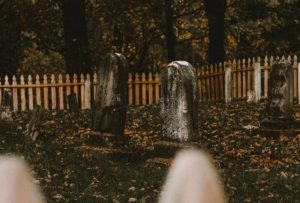 In Leicester Massachusetts on a long forgotten dirt road lies an old Quaker cemetery that has developed somewhat of a reputation over the years. It lies in a secluded woodland at the south end of the Kettle Brook Reservoir area of Worcester/Leicester.

The correct name for the cemetery is the ‘Friend Cemetery’ and the Worcester Pleasant Street Friends Meeting owns it. The fact that there is no kind of marker or nameplate showing its actual name, has led visitors to dub it Spider Gate Cemetery due to the spider web like pattern that adorns its beautiful wrought iron gate.

Spider Gate cemetery has many interesting stories attached to it, and these include… It has an altar in the center used by Satanists… A young boy hung himself in the cemetery… There is a second cemetery near by that can be found only once,… and there is an area in the cemetery where no grass will grow.

If you walk around Marmadukes gravestone 10 times at midnight and say ‘Marmaduke speak to me,’ kneel down and place your head on the gravestone, he will speak to you. White stuff oozes from the ground. There is a cave near by that a young girl had been killed and dismembered in. If you turn over rocks in an area outside the cemetery wall, you will find runes etched on them. Most frightening of all, is that the cemetery is considered to be the Eighth Gate to Hell!

This is perhaps the most popular urban legend from the area, and most locals never saw any great need to venture out there, and from the wild versions of the story told, thats hardly surprising really.

The running legend was that the place had been inundated by Satan worshipers who conducted rituals on what was called the “alter” (which in reality is just a barren, flat outcropping in the actual cemetery). Their rituals, coupled to the suicide of a young man from a tree in the cemetery was enough to taint the sacred grounds and turn them into a pathway to Hell.

Of course it all depended on the person telling the story, and how much they would embellish it, but the last gate, the eighth gate, always had the same outcome for the poor soul who passed through it. It was said that the eighth gate was the “Gate to Hell”, and that when one passed through this gate there was no return. Even if they were to make it back out – which of course it was told nobody ever did – that the demons would follow them, and they would be thrown into an irreversible madness for the rest of their days.

In reality, the wilderness cemetery is small, ordinary, and well kept. Its few sparse groups of headstones are set neat, clean, and even in the ground. Some of them date back to the 1700s, but are so well-tended that they seem newer.

What Do Ghosts Know? Do They Have Choices?