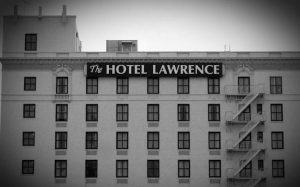 The 1925 boutique hotel in downtown Dallas has charm, mystery and some of the who-dun-it appeal of the 1930s. Sure, there were deaths. Were they murders?

The Hotel Lawrence is in downtown Dallas, two blocks from the Book Depository, Kennedy Memorial and Dealey Plaza. The hotel was built in 1925 by George Scott, as a railway hotel and is just across from union station.

First named the Scott Hotel, changes in ownership over the years have resulted in several name changes. In 1930 it was renamed the Lawrence but between 1980 and 2000 the hotel was called the Bradford and the Paramount, regaining its title of The Hotel Lawrence in the year 2000. Despite all the changes the hotel retains many original art deco features.

The Lawrence is a inexpensive hotel, providing individual touches such as a welcome kit for your dog or cat, and free milk and cookies in the evening, but the rooms are small, though adequate unless you insist on doing yoga during your stay here. Railway hotels were designed to provide accommodation for one or two nights. Some guests had never left.

Macabre Events on the 10th Floor

The 10th floor is renowned for suicide and murder. In the 1940s a woman plummeted to her death from a window on the 10th floor. Did she fall, did she jump, or was she pushed? Staff and guests report seeing moving shadows and hearing the sound of someone crying.

Jack Jackson, known as “Smiley,” is said to have been murdered in room 1009, although some versions of the story say it was room 807. Perhaps they are one and the same; there were originally 160 rooms, now there are 118.

Smiley can be picky about whom he allows in his room. It is a good idea to say, ” Let me in, Smiley,” or acknowledge his presence in another way before entering. Another murder is said to have happened in the same room, a Mr. Brookshire had his throat cut.

One guest reported the feeling of a towel being placed around their neck. You’d wonder if the events are connected.

Unexplained Happenings on the Lower Floors

In the early days of the hotel, a casino was run on the second floor. An unhappy gambler wanders through the hallways, apparently still hoping to make up his losses.

Late at night when all is quiet, the faint sound of someone walking in high heeled shoes has been heard in the lobby. In the basement, laundry carts move of their own volition and doors open and close.

Voices are heard, a watchful presence is felt and staff wonder why they suddenly feel cold.

The Hotel Lawrence receives mixed reviews. Guests complain of the bath being dirty, the elevator acting erratically, and, in one case, of the alarm clock in the empty next room being set off in the early hours and of being unable to use the phone to call the lobby.

The guest dressed and went down to the lobby to ask for somebody to turn the alarm off. Had he been aware of the spirits wandering the hotel, he may have used earplugs instead.

Guests have also complained of the cold in their rooms, but in the Dallas summer it is easy for people to be over exuberant in setting the air conditioner controls.

In an old hotel with thin walls and inadequate insulation, all these manifestations of otherworldly activity are easily explained. Or are they?