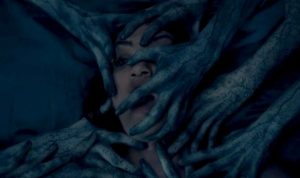 My aunt lives in a housing project in Harrisburg, Arkansas, which is hardly a place where anyone would expect to have any unusual experiences. However, on Thanksgiving Day 1999, my aunt had an experience which was quite strange.

That morning, my aunt was lying awake in bed trying to get her last few moments of rest before she had to get up and get started on the holiday preparations. Suddenly, she felt two fingers touch her hand, which was resting on her hip.

She automatically thought it was one of her two sons, so she just turned around and said, ” What?!” only to find no one there. Later that day, when everyone was celebrating, the conversation turned to ghosts.

At first, she said yes and then recalled that from the time she moved there, sometimes in the wee hours of the morning, she would hear someone knocking at her door, and then drag herself out of bed only to find no one there. She eventually learned to ignore the knocking.

Recently I paid my aunt a visit and asked her if anything else unusual had happened since Thanksgiving, and she said that once when she was lying in bed awake, the invisible fingers touched her arm. She said that it just felt like human fingers, but somehow they didn’t seem altogether solid.

Also, her 8-year-old son sometimes complains that he hears things in his room and he often has nightmares. Once he came running into my aunt’s bedroom and told her that there was something in his room.

My aunt doesn’t really know anything about the history of her apartment or the housing project, but she figures that the complex must be at least 20 years old. Also, not too long ago, some Native American arrowheads were dug up around the project, so maybe that serves as a clue. My aunt isn’t really scared of whatever it is that has caused the strange occurrences.

She figures that if the apartment is haunted, the spirits must not be malevolent since no harm has come to her or her children.