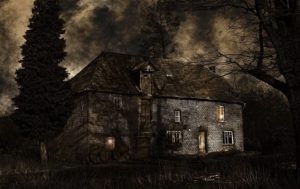 It’s been in the family for 37 years.

When my grandfather died in the hospital, my grandmother had the funeral arrangements here in the house. The living room is large and they had his casket at the far end of the long oblong room. My grandmother loved this house as I do.

My grandmother passed away in October of 1987. This is when the incidences started. The first one happened one night as I was laying beside my daughter to get her to go to sleep and I was staring at the light and remembering the things my grandmother use to have in the room, the way it smelled and the feel of the cold linoleum on my feet in the mornings.

Then suddenly the light went off and I jumped out of the bed and the light switch was turned on and the light from the hallway was still on. After about 30 seconds the light came back on. This light had never did this before that night or anytime after that.

Several other little things kept happening. Like the dining room light swaying back and forth, the computer keys tapping in the middle of the night, and tiny footsteps walking up and down the hallway. In October of 1988 I had just told a friend about the incidences that had happened and I was alone in the house sitting in the dining room.

As I thinking about it I was staring at a wagon with artificial vines and all of a sudden the vines floated up in the air, was suspended for a few seconds, and then fell. That evening I was telling everyone how it happened and the cabinet door (with a latch) flew opened. About a month later me and my boyfriend were up late (around 2 am) watching TV.

My children were not at home. We were sitting on the couch where we could view the dining room. In the dining room there is a big glass sliding doors. It had storm windows and it was taped up for the winter. A movement caught our eyes and we freaked out. The curtain panel came out about ten inches from the window and stayed there for about 3 minutes. It looked like someone was standing behind it. My dog was also looking at it and she kept tilting her head side to side and she crept slowly away and hid.

There was no explanation for this that we could find. I have a forced air furnace, but it was not running and the wind was not blowing when this happened.

The worse thing that happened to me was the time I was typing on the computer and when I pushed print it did not print what was on the screen.

The only words I could make out was help, witch, Ouija, go and other 2 letter words. I showed this to my brother and then I lost it. I think I threw it away with my children’s school papers. The computer was set up where my grandfathers casket once was.

I was scared for a few months and I was ready to move. Everything that happened in the dining room formed a circle. In the middle of the circle is the chair that my grandmother always sat in when she visited us.

Nothing has happened to me lately, but my daughter had a ghost sit on her bed and it reached out and barely touched her then walked through the wall. And she says that almost every night she sees a ghost walk down the hallway.

If she watches it from the corner of her eye it will move slowly but if she looks at it directly it then it moves quickly. Several other things have happened but as long as I believe that the ghosts are my grandparents then I am not afraid.

Ghosts and Legends of the Mississippi Gulf Coast