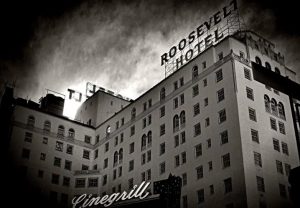 Opened in 1927 as a luxurious hotel to service the new movie industry in Los Angeles, the Hollywood Roosevelt Hotel was the the place to catch a glimpse of movie stars.

Named after Theodore Roosevelt, this hotel was financed by an affluent Hollywood group including Louis B Mayer, Mary Pickford and Douglas Fairbanks Jr. In the late 1920s, the cost of building the hotel was approximately $2.5 million so it was an extremely expensive project.

It was the place to be seen by celebrities and hosted opening night galas and any important Hollywood event. In fact, in 1929 the Hollywood Roosevelt hosted the first Academy Awards ceremony in the Blossom Ballroom.

This 12-storey hotel was built with 302 rooms and suites. In 1983, there was a $240 million dollar restoration done on the Hollywood Roosevelt and it now features 335 luxury rooms. Located in hub of Hollywood, the Roosevelt Hotel is located across the street from Mann’s Chinese Theater and the famous Hollywood “Walk of Fame” is at its doorstep on Hollywood Boulevard.

Haunting of the Hollywood Roosevelt Hotel

Marilyn Monroe stayed at the Hollywood Roosevelt for two years just after she became a famous model. She lived in Suite 1200 which looked down to the pool. In Marilyn’s room there was a full-length mirror and it was eventually moved to the hotel manager’s office.

A hotel employee was dusting the mirror one day and saw the face of Marilyn Monroe staring back at her. The mirror is now located in the hotel lobby where visitors hope to see the occasional of appearance of Marilyn in the mirror.

Montgomery Clift lived in Room 928 at the Hollywood Roosevelt during the filming of “From Here to Eternity”. His ghost can be seen pacing the hallway outside of his room while practicing his lines on the 9th floor.

Witnesses have also seen Montgomery playing his bugle in the hallway. Guests who have stayed in his room feel a ghostly presence and have felt a pat on their shoulder. Many hotel employees have felt cold air brush by them on the 9th floor.

In the Blossom Ballroom at the Hollywood Roosevelt, a cold spot has been consistently detected. There are no air conditioner vents or causes of drafts in the area. The circle is approximately 30 inches round and is 10 degrees cooler than the rest of the room. Psychic investigators have seen the spirit of a man dressed in black in the ballroom.

Famous psychic Peter James investigated the Hollywood Roosevelt Hotel in 1992. He detected the ghost of Montgomery Clift in room 928 and sensed the strong presence of Marilyn Monroe in the Tropicana Bar.

He also felt the presence of Humphrey Bogart near the elevator and Carmen Miranda in a 3rd floor hallway. In the Blossom Room, he discovered Betty Grable and Edward Arnold.

There is a theory that ghost sightings began to take place after renovations were done to a building. This is certainly true at the Hollywood Roosevelt Hotel where the renovations in 1983 seemed to stir up the stars.