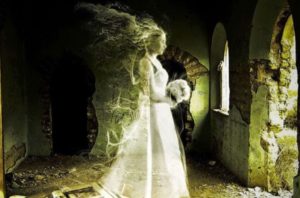 Fort Laramie, in Wyoming, has its roots in 1834, when Fort William, a trading post overlooking the Laramie River was built. Wagon trains heading west on the Oregon-California Trail rested and bought supplies there.

In 1841, Fort John replaced Fort William. In 1849, military post Fort Laramie was established because Amerindian attacks became more common as more people traveled to find new homes in the west or to join the Gold Rush. Laramie, like many other American forts, is said to be haunted.

There are two different versions of her legend. One is that she was the daughter of the agent in charge of the American Fur Company at the Fort John trading post. His daughter, an accomplished equestrienne, visited him.

The agent had several men guard her when she rode a horse off of the fort’s grounds. One day, while he was away from the post, she sneaked away riding a big black horse. Two men chased after her, calling her to stop. She ignored them and rode deeper into the prairie and never returned.

The other version is that she was the daughter of the owner of Fort Laramie’s Sutler’s Store. A sutler is a civilian who’s licensed by the government to sell supplies to military personnel.

A skillful equestrienne, she rode a horse daily, first on or near the post, then at increasing distances from it. Despite warnings from her father not to, she often rode alone. One afternoon, she left the post for a solitary ride and didn’t return.

Both versions agree that she wore a beautiful green riding habit with a matching veiled hat and that the cause of her disappearance was never discovered.

Was she kidnapped, murdered, in a fatal accident, lost, perhaps, rescued by friendly AmerIndians or lost and died of starvation? It’s agreed that seven years after her disappearance, her ghost — wearing the green riding habit, astride a black horse — first appeared.

Since then, her wraith and spectral horse are said to appear on the Oregon Trail, east of Fort Laramie, every seven years.

The old Captain’s Quarters was built in 1870. Doors open by themselves and sounds of phantom footsteps are heard. Witnesses have seen bright lights in the building late at night, lights coming from inside the structure, although it has no electricity. The haunter has been nicknamed George.

Old Bedlam was built in 1849 as bachelor officers’ quarters. This specter, thought to be a Cavalry Officer, roams throughout the building and, sometimes, tells people to be quiet.

The Cavalry Barracks building, built in 1874, once housed hundreds of soldiers. Early in the morning, people have heard the phantom sounds of heavy boots treading on the boardwalk, approximately at the time soldiers would have responded to reveille.

Ghostly Phenomena in and Around Fort Laramie

People have seen a spectral young man wearing a raincoat who looks as if he is talking to someone, although no one or nothing else is present.

There’s a wraith of a surgeon, in a blood-splattered uniform who appears to be irritated. A headless man’s specter has been sighted throwing rocks into Deer Creek, a small stream that runs through the fort’s grounds, during early morning hours.

Bovee Draw is southeast of the fort. Around midnight, witnesses have reportedly seen the ghost of a strange Civil War soldier. The specter of a man holding a bloody sword has been seen staring into the water in Detention Dam, north of the fort at midnight.

In 1976, the Cheyenne Westerners sponsored a midnight event at the fort. The spectral Lady in Green was expected to appear that year.

The hosts decided to leave nothing to chance because ghosts can be unpredictable. They had a young man drape a blanket over himself and ride across the grounds at midnight.

His appearance received the expected reactions. Afterwards, he told his friends that he’d never do that again because he had heard phantom hoof beats following him during his ride.

The fort, administered by the National Park Service, is an educational site for people of all ages. There are annual free Moonlight Tours during which visitors will see actors portraying people involved in the history of Fort Laramie.

Park guides meet them in the parking lot, give a short talk and then lead groups through a series of short historical re-enactments. Perhaps, some of the visitors might see the genuine Lady in Green…