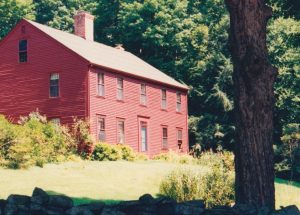 No one has lived in the colonial home for decades, but reports indicate that someone or something may still be there.

The town of Tolland lies in the sleepy northeastern corner of Connecticut., but in this quiet town lies a building that is reportedly anything but quiet. The 1720 Daniel Benton Homestead is situated on what is now Metcalf Road.

Now the property of the Tolland Historical Society, no one has lived in the homestead for decades, but it has been whispered among some who have had paranormal experiences, that something might still be there.

History of the Daniel Benton Homestead

The house was built in 1720 and boasts a rich history. During the Revolutionary War, the house was used as a temporary prison for captured Hessian soldiers. Since it was situated on what was then Boston Post Road, the house was a suitable layover until the weather allowed for transport of the soldiers to Boston, where they would then be sent home.

Many of the soldiers enjoyed their stay in the basement of that old homestead, leaving graffiti that can still be seen today. Some did not leave Tolland at all, choosing to make their home in the small colonial town.

The tragedy was also a part of the homestead’s past. Elisha Benton and a local girl, Jemima Barrows, were deeply in love, but for some reason lost to history, they were forbidden to wed. Elisha went off to fight in the war, and when he returned in late 1776, he had been infected with smallpox.

Jemima offered to care for him in the home, and was secured in a sick room with the dying Benton to avoid spreading the contagion. There, she tended to his needs until he passed away three weeks later. Jemima, in caring for her lover, had also contracted smallpox, and she died within a few weeks. The family allowed her to be buried near Elisha Benton, on the property.

The house remained in the Benton family until 1932, when the homestead was purchased by local radio personality, Florrie Bishop-Bowering. She devoted a lot of time to restore the old house during the years she lived there. Finally, in 1968, the building came into the possession of the Tolland Historical Society and was opened as a museum the following year.

Over the past few decades, it has been rumored that the homestead is haunted. One of earliest reports comes from a maid in the employ of Florrie Bishop-Bowering. The maid described how she had seen a woman in white, perhaps a bride, weeping.

A member of the historical society reportedly had an experience on the second floor, an area off limits to visitors. She went up the stairs, only to return a few moments visibly shaken, remarking that she would never go up there again.

There have also been tales of unexplained knocking and apparitions seen dressed in colonial garb. Neighbors have recounted seeing lights flickering in the vacant house, and observed the figure of a man in the Revolutionary War uniform at the front door.

There is something unsettling about old houses, and the Daniel Benton Homestead is no exception. The crooked, small doorways, tiny dark halls, and the slanted creaky floors are daunting at the least, but could something ghostly be in the house?

There have been investigations in the old homestead over the years, from paranormal researchers to psychics, but none are able to either prove or disprove a haunting. The only thing that is known for sure is that the events inside the Daniel Benton Homestead will continue to be talked about, if but only in a whisper…

The Voice In The Night