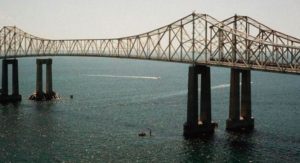 The original Sunshine Skyway Bridge was built in 1954, and the bridge may have been cursed from the very start. Several sacred Indian shell mounds were destroyed in the construction.

The approach road to the Skyway was built over top of one of the shell mounds, and one of the bridges support columns was placed on top of another. At first all seemed to go well. Then the suicidal bridge jumping began.

Although not a lot of suicide jumps were made from the bridge, strange stories of encounters with the ghosts of the jumpers soon began to circulate.

In most cases the story was that someone driving over the bridge sees a young woman walking on the side of the bridge. When they stop to help, the woman gets in the car only to vanish before the car gets to the end of the bridge.

But suicide, ghosts and an Indian curse would pale to what happened to the bridge in 1980.

January 28, 1980. Two ships passing beneath the Skyway collide, 29 people are killed. Then, on May 9th, on a dark foggy morning a massive tanker slams into the Skyway Bridge.

The center span of the bridge collapses into Tampa Bay. Drivers on the Skyway, nearly blinded by the dense fog were unaware of what had occurred and began to plunge into the bay.

In all 8 vehicles would drop into the depths of Tampa Bay that morning. One of those, a Grayhound Bus loaded with College Students. In all 35 people would die that day. In less than 6 months the Sunshine Skyway had claimed 64 lives.

The Skyway had to be rebuilt. The new Sunshine Skyway Bridge was opened in 1987, with large concrete barriers to prevent any future ship collisions with the bridge.

Parts of the old bridge were left in place and are now used as fishing piers. Fishermen on the piers report ghostly activity including a apparition of the Grayhound Bus plunging into the bay.

Although the first Skyway Bridge had suicides, they were few. It’s different on the new bridge, which is 196 ft above the bay, and ranks at number 4 for the most suicides on a bridge in the entire country.