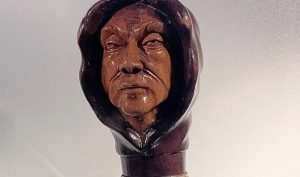 JACK the Ripper remains one of the world’s most infamous murderers whose true identity has never been revealed. Now the suspected face of the serial killer who terrorised London’s East End in the 18th century has finally been revealed generations on, reports Yahoo! News.

The only known facial composite of the killer has been shared with the public, having been discovered etched into the handle of a wooden walking stick that had been owned by the police officer who dedicated years of his life to snaring him.

Scotland Yard Detective Frederick Abberline was ultimately unsuccessful, removed from the case in 1889, but the stick that was in his possession was lately rediscovered.

The cane had been kept in storage at a police college in Hampshire that closed down seven years ago. Feared lost, it was rediscovered by staff searching through memorabilia at the College of Policing’s headquarters in Ryton, West Midlands.

“Finding this cane was an exciting moment for us,” the college’s content creator, Antony Cash, said, adding: “Jack the Ripper is one of the biggest and most infamous murder cases in our history and his crimes were significant in paving the way for modern policing and forensics as it caused police to begin experimenting with and developing new techniques as they attempted to try and solve these murders, such as crime scene preservation, profiling and photography.”

If it ever faded, it has indeed put the spotlight once again on the infamous case that saw the killer of five prostitutes in the Whitechapel area of London in 1888 branded “Jack the Ripper”. Mary Ann ‘Polly’ Nichols, Annie Chapman, Elizabeth Stride, Catherine Eddowes and Mary Jane Kelly all had their throats cut and were mutilated in such a way that police believed at the time their killer was one in the same and had knowledge of human anatomy.

Half a kidney, which was extracted from one victim, was mailed to police along with a series of notes from the purported killer calling himself Jack the Ripper.

More than 200 names have been put in the frame, including one put forward in the 2002 book, Portrait of a Killer: Jack the Ripper – Case Closed, by US author Patricia Cornwell who presented her theory that Walter Sickert, a German-British painter, was the killer.

But many theories have been floated through the years as to who the killer was, and yet, the mystery endures.

As time goes on, it seems increasingly unlikely the case will ever be solved, but each “fresh” angle can do no harm. Cash added: “This walking cane is such a fascinating artefact which represents such a historically significant time in policing.

It’s amazing that we can put it out on display here in Ryton, alongside the original newspaper cuttings, so that our officers can see first-hand how far we’ve advanced in policing since then.’’

Another Giant Humanoid is filmed on a hill in Aguascalientes, Mexico