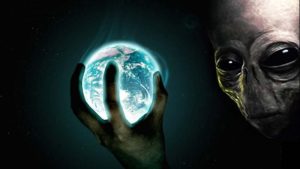 The biggest mystery concerning the history of our universe is what happened before the big bang. Where did our universe come from? Nearly a century ago, Albert Einstein searched for steady-state alternatives to the big bang model because a beginning in time was not philosophically satisfying in his mind.

Now there are a variety of conjectures in the scientific literature for our cosmic origins, including the ideas that our universe emerged from a vacuum fluctuation, or that it is cyclic with repeated periods of contraction and expansion, or that it was selected by the anthropic principle out of the string theory landscape of the multiverse—where, as the MIT cosmologist Alan Guth says “everything that can happen will happen … an infinite number of times,” or that it emerged out of the collapse of matter in the interior of a black hole.

A less explored possibility is that our universe was created in the laboratory of an advanced technological civilization. Since our universe has a flat geometry with a zero net energy, an advanced civilization could have developed a technology that created a baby universe out of nothing through quantum tunneling.

This possible origin story unifies the religious notion of a creator with the secular notion of quantum gravity. We do not possess a predictive theory that combines the two pillars of modern physics: quantum mechanics and gravity. But a more advanced civilization might have accomplished this feat and mastered the technology of creating baby universes.

If that happened, then not only could it account for the origin of our universe but it would also suggest that a universe like our own—which in this picture hosts an advanced technological civilization that gives birth to a new flat universe—is like a biological system that maintains the longevity of its genetic material through multiple generations.

If so, our universe was not selected for us to exist in it—as suggested by conventional anthropic reasoning—but rather, it was selected such that it would give rise to civilizations which are much more advanced than we are.

Those “smarter kids on our cosmic block”— which are capable of developing the technology needed to produce baby universes—are the drivers of the cosmic Darwinian selection process, whereas we cannot enable, as of yet, the rebirth of the cosmic conditions that led to our existence.

One way to put it is that our civilization is still cosmologically sterile since we cannot reproduce the world that made us.

With this perspective, the technological level of civilizations should not be gauged by how much power they tap, as suggested by the scale envisioned in 1964 by Nikolai Kardashev. Instead, it should be measured by the ability of a civilization to reproduce the astrophysical conditions that led to its existence.

As of now, we are a low-level technological civilization, graded class C on the cosmic scale, since we are unable to recreate even the habitable conditions on our planet for when the sun will die. Even worse, we may be labeled class D since we are carelessly destroying the natural habitat on Earth through climate change, driven by our technologies.

A class B civilization could adjust the conditions in its immediate environment to be independent of its host star. A civilization ranked class A could recreate the cosmic conditions that gave rise to its existence, namely produce a baby universe in a laboratory.

Achieving the distinction of class A civilization is nontrivial by the measures of physics as we know it. The related challenges, such as producing a large enough density of dark energy within a small region, already have been discussed in the scientific literature.

Anything better than this minimum requirement is much less likely to occur because it requires additional rare circumstances and does not provide a greater evolutionary benefit for the Darwinian selection process of baby universes.

The possibility that our civilization is not a particularly smart one should not take us by surprise. When I tell students at Harvard University that half of them are below the median of their class, they get upset.

The stubborn reality might well be that we are statistically at the center of the bell-shaped probability distribution of our class of intelligent life-forms in the cosmos, even when taking into account our celebrated discovery of the Higgs boson by the Large Hadron Collider.

We must allow ourselves to look humbly through new telescopes, as envisioned by the recently announced Galileo Project, and search for smarter kids on our cosmic block. Otherwise, our ego trip may not end well, similarly to the experience of the dinosaurs, which dominated Earth until an object from space tarnished their illusion.

Why is the US so wrapped up on the subject of UFOs right now?

Is the Universe Finite or Infinite?