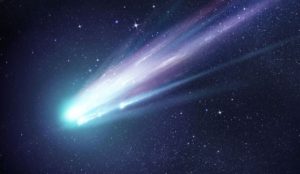 Comets have for centuries been looked on as portents of doom. One in particular, Halley’s Comet, to the people of medieval England at least, seemed to justify that reputation on its appearance in 1066.

When the earth passed through the tail of Halley’s Comet in May 1910, many people in the Western world held their breath due to the predictions of one notable scientist.

The comet named for Edmond Halley visits Earth’s neighborhood every 75 year or so. Halley was the first astronomer to plot the comet’s course and so predict its future behaviour.

He calculated its regular but very elliptical orbit of the sun, and the resulting passes it would make close to earth’s orbit. The first appearance of the comet that could test the accuracy of Halley’s calculations came in 1758, 16 years after his death.

Two orbits later it was 1910. Due to the earth’s position relative to the sun at the time Halley’s Comet approached, its proximity to Earth was one of the closest. By this time telescopes had become within the reach of many people and cameras were available that could clearly capture the image of the comet as it streaked through the sky.

There was great anticipation, excitement and a considerable amount of apprehension as Halley’s Comet approached. On 20 April the comet reached perihelion, passed around the sun and started to make its way back towards the depths of the solar system. There was real concern that the pass by Earth would be too close for comfort.

In mid-May 1910 Halley’s Comet was at its closest point to Earth. It was a spectacular sight in the sky.

The comet’s course meant that Earth would pass through its tail of cosmic dust, a tail that stretched nearly 40 million kilometers and which some proclaimed would poison all the world’s life out of existence.

The basis for the fear that gripped much of American and other western societies was the announcement in February 1910 by the Yerkes Observatory in Chicago that the chemical compound cyanogen had been detected in the comet’s tail.

French astronomer, Camille Flammarion was reported by the New York Times as saying that this gas “would impregnate that atmosphere and possibly snuff out all life on the planet.”

Flammarion was well known and had popularised astronomy with his writings, but he had a vivid imagination and was seen to be somewhat eccentric. 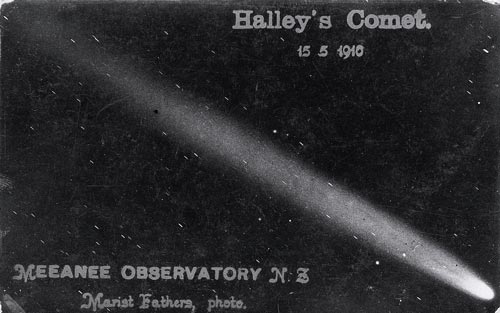 In fact the gases and other matter in the tail of Halley’s Comet are dispersed to an almost unimaginable degree, and this was known in 1910. Scientists and astronomers sought to reassure the public that there was no danger.

Well known American astronomer Percival Lowell described the contents of the tail as “so rarefied as to be thinner than any vacuum.”

The End of the World Predicted by Some

The press however was onto a great story – the impending end of the world. The more sensational newspapers of the day exploited Flammarion’s statement for all it was worth.

Other newspapers duly conveyed the public reaction to the revelations. The New York Times reported that “terror occasioned by the near approach of Halley’s comet has seized hold of a large part of the population of Chicago.” In Georgia people “were preparing safe rooms and covering even keyholes with paper,” according to the Atlanta Constitution.

On 19 May 1910 the earth came through the tail of Halley’s Comet unscathed. The Chicago Tribune proclaimed ‘We’re Still Here’.

While Halley’s Comet brought fear and trepidation to some in 1910, the vast majority of Earth’s inhabitants, those without access to scientific proclamations and the media, were oblivious to all the fuss. They watched the show then carried on with life as normal.

Halley’s comet duly returned in 1986. Earth was in such a position that the pass was not nearly as close nor as spectacular as 76 years earlier.

But this time there were spacecraft to go out and collect samples so that scientists could ascertain beyond any doubt just what really was in the comet’s tail. When next it passes in July 2061, the world will know for sure what to expect, and what not to expect.

Was the Big Bang Really an Explosion?